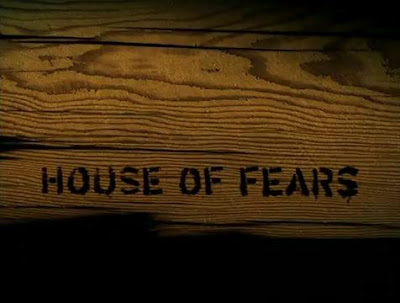 When the mood hits me right, I don't really demand much from my slasher movies. Just make the plot interesting, throw in some decent looking monsters, some workable kills and before you know it, you have me satisfied for the afternoon.

House of Fears (2007) is one such movie that isn't that grand but does the job right enough to be watchable. It cold opens with a girl panicking from what look like a live burial before shifting scenes to Africa, where miners have unearthed something powerful enough to set everyone into a killing frenzy. Cydney Neil (Of Utah's Rocky Point Haunted House, playing herself) then arrives at the dig in hopes of purchasing some goods, misses the numerous dead men from afar, spots an idol among the mess and ships it to America to set it as a prop for one of her haunted houses. All that mining and murdered men just for a a decoration...

Some time later in Salem, Oregon, Hailey (Sandra McCoy) is forced by her folks to tag along her new step-sister Samantha (Corri English) to a party she's attending so the two can bond. There, shenanigans rear their ugly heads when Hailey and her group decide to sneak into a soon-to-open haunt called House of Fears just for the kick of it and Samantha is invited to join. This plan is set for something deadly, unfortunately, as a familiar African idol that just happens to be sitting around someplace within the haunt and it turns out to be malevolent, capable of creating murderous avatars and bringing animatronics to life based on its victims' fears. As the teens find themselves haunted and hunted one by one, their only chance of surviving the night is to brave their fears or die trying.
From the paint-by-numbers teen dynamics and stereotypes to the more than basic murderings and jump scares, House of Fears (2007) never really bothered to stray off the beaten track that much despite the opportunities that it could have. The concept of slasher victims being snuffed out through deaths inspired by their fears isn't exactly that new with movies like Phobia (1980), The Fear: Resurrection (1999) and Boogeyman 2 (2007), though Fears opted to give this concept a more paranormal grounding by introducing an evil idol with dark powers. If it wasn't for the movie's restricted budget, this idea may have led us to a couple of rather spectacular supernatural deaths, instead the film worked around it by cooking up fairly impressive-looking monsters manifested by the totem. Some of them were based on very specific kind of fears (a demonic clown for coulrophobics, a scarecrow for formidophobics), others being representation of said fear (a grave-digger for taphophobics, a machete-wielding mannequin for aichmophobics), all in all alright on the make-up and practical effects department.

Any drawbacks apart the generic plot and writing would be the killings done by our monsters. They're mostly dry and standard, some even done offcamera, disappointing gorehounds or even general horror fans who are hoping to see a little more excitement from their monster attacks. Still, with what it had to work with, House of Fears (2007) remains effective in tone and scares for what is basically a funhouse slasher paying small tribute to classic haunts and B-grade entertainment; it's teens in a haunted "haunted" house trying to survive the attacks of physical demonic forces and that's that. Nothing revolutionary, right, but it is safe to say this is a movie meant to be simplistic and I just find that very endearing as a fun spook show. Worth a try.
Bodycount:
1 male hacked with a pickaxe
1 males seen murdered
1 male found murdered
1 male gutted with a cleaver
1 female dragged underneath the sand, suffocated
1 male suffers a heart attack (flashback)
1 male mauled by dog
1 male electrocuted
1 male strangled, neck broken
Total: 9
Posted by Kaijinu at 5:22 PM