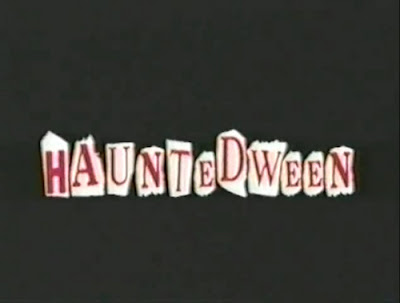 HauntedWeen (1991)
Rating: **1/2
Starring: Brien Blakely, Blake Pickett, Brad Hanks
Whenever I hear this title, the very first thing to come out of my mind are teens being terrorized by a possessed wiener but, alas, HauntedWeen (1991) wasn't bold enough to pull a stunt like that. Sadly. 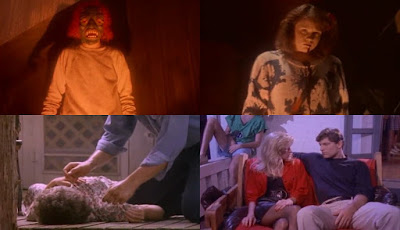 The movie starts off at Halloween night in 1970, with young Eddie Burber working at a local haunt as a ticket collector, bummed out as he prefers doing scares than receiving fares. Embolden for tonight however, Eddie sneaks into the walk-through in hopes of giving the last batch of patrons a good jolt and he succeeds in this when he traps one of the customers, a lost young girl, into a room, chases her around until she accidentally trips into a spike. He then decapitates the kid just to finish it all off and Eddie soon finds himself beckoned by his mother to leave town to avoid capture.
And avoid capture they did for the next twenty years, living deep in the woods and growing older together. Eddie's mum then croaks one day, so now he is all alone and he can pretty much go back to killing people because, apparently, there's nothing much else to do for someone in hiding for two decades and guilty of manslaughter other than go full psycho. 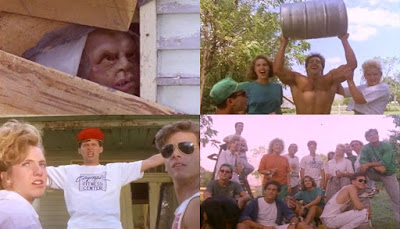 All the while, a Sigma Phi frat house is threatened to be closed down by their national headquarters due to, well, dues, which apparently accumulated to about three grand and some. So in desperation to keep their fraternity, the happy-go-lucky members start a "hellraiser fundraiser", treating anyone willing to join in to booze, bands and a lot of hammy hookums for a donation. This brings Eddie to the picture, "helping" the boys out by cryptically suggesting they open a scare house and even hands them the key to the haunt that started it all. Not thinking much about how suspicious this all is, the frat buddies agree to the idea and one montage later, their Halloween scarehouse is complete, not knowing our resident psycho has his own plans for them at opening night.
Not gonna lie, HauntedWeen (1991) fails as horror. Or thriller. It may have succeed on being a comedy but that's more on the fact that everyone here acts like a Saturday morning cartoon and if that's not a clear sign to the kind of low rent cheekiness this movie have, then I don't know what is. It's not going to appease most slasher fans with its low kill count with mostly dry gore effects and its killer being a lite-Michael Myers clone of sorts, but what it lacks on scares and spills are made up by its enthusiastic tone and how everyone involved, film students at Western Kentucky University, shows they're in on the mediocre fun. Yes, the near-absent budget and aged production shows (look how big those perms are!), its writing is far from inspired (another shlocky romantic subplot this way comes) and the cast and crew are obviously inexperienced (I'm sure one of them is a cyborg listening to how they deliver their lines), but I had fun with the film's impish hokey-pokey direction, its little silly moments that disregard common sense, that comic relief guy with the fake Southern accent, so I can't completely dismiss this film's worth as a small cult favorite. 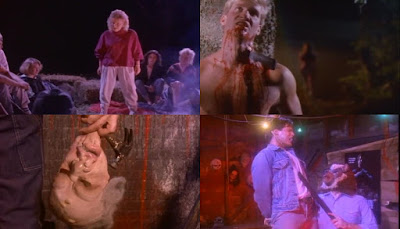 One's patience and tolerance for bad movie cheese can get a tad (or, y'know, completely) testy with this one, but I can personally say HauntedWeen (1991)'s gutso and zaniness still has an audience and it definitely found one in me. If you like your homemade slashers competent enough to stand, Kentucky fried and thick on the skull, not minding the lack of chills, high onscreen carnage count or a murderous Bratwurst to justify calling this film HauntedWeen (coz..."weenie"), then you're an odd creature and you might enjoy this title!
Bodycount:
1 girl startled into a spike, decapitated with a machete
1 elderly female suffers a heart attack
1 male pinned to a tree with a machete through the neck
1 female had her head twisted
1 female gets a chainsaw to the back of her neck
1 male decapitated from a baseball bat blow
Total: 6
Posted by Kaijinu at 6:49 PM