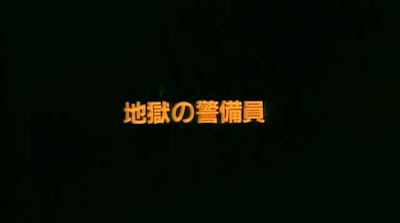 Formerly an art gallery curator, Akiko Narushima (Makiko Kuno) has taken in a new position as an office lady for the Akebono Corp trading company where she mostly works as an adviser regarding the paintings they purchase. At the same time, a murder case concerning a former sumo wrestler who murdered his lover and friend after finding them on a cheater's tryst is in talks of getting reopened after the wrestler got off on an insanity plea, unbeknownst to them that said towering sumo Fujimaru (Yutaka Matsushige) has recently taken a new job as a security guard at Akebono Corp.

After a brief encounter, Fujimaru develops a quick obsession for Akiko and began watching her through security cameras and keeping an earring she dropped, all the while living within the moist inner workings of the building and murdering a few staff that either rubs him the wrong way or just happens to be there. Eventually, Akiko will find out about her murderous admirer, forcing him to puts the building into lockdown and murder off all the unfortunate associates one by one.

From what I can gather, director Kiyoshi Kurosawa has a small cult status among genre fans for the variety of films he released from "pinkeiga" (Japanese theatrical smut films) to crime thrillers, as well as fair contenders for Asian horror cinemas such as Pulse (2001), Loft (2002) and Retribution (2006). There's definitely a style to his direction, more of it to do with the sullen atmosphere encapsulated by slow long takes and dreamlike visual imagery, a matter that's felt all over this cryptic early 90s Asian slasher through the many static shots and dim lighting within moist and dilapidated sets crumbed with concrete and rebar, putting good use to the film's minimalist budget and lean story.

Plot-wise, The Guard From Underground (1992) plays it majorly straightforward and steady around the horror department, with some cues of workplace politics satire strewn around to keep the story going like a security chief who decided to keep Fujimaru despite finding out about his murderous tendencies, just so he can have the killer get rid of an employee that's been getting on his nerves lately. There's no mystery behind the killer nor his motives, he is simply out to kill people because he can and his blatant interest towards Akiko can be pretty much sum up to a simple puppy dog interest after assuming she understands him, thus basically a workplace stalker situation with a bodycount.

John Carpenter's classic slasher Halloween (1978) definitely has its share of influencing Guard with how our sumo killer moves and shot in some scenes, like his first appearance where he is mostly kept hidden in the shadows, just seen from neck down. There's a stronger emphasis on building tension so the violence is noticeably low on gore, but with Fujimaru preferring to use his brute strength to thin down the office staff, the movie does still found ways to be brutal and bloody without breaking into the excessive, as seen in its memorable kills involving lockers, ladders and billy clubs.

Looking past some slow scenes and a few oddly mellowed acting (fair court on the latter though, as there's really no point fleshing out the casts as two-dimensional characters seeing most of them are par for the course of being dead in the end), The Guard From Underground (1992) can be visually enticing experience of a slasher movie as it lovingly tributes 80s bodycounters. It is far from being the best among its director's line of films but as a cult favorite, but its unique enough to be a watchable fare and a fine addition to any genre fan's collection.

Bodycount:
1 male found mangled inside a locker
1 male forced to touch a live fusebox, later smothered with a plastic garbage bag
1 female had her chest stomped
1 male repeatedly beaten against steam pipes, brained with a billy club
1 male repeatedly brained with a billy club and a pan, gets boiling water all over him
1 female stuffed and crushed inside a locker
1 male hacked on the neck with a dislodged paper guillotine trimmer, later hanged
Total: 7
Posted by Kaijinu at 11:54 AM