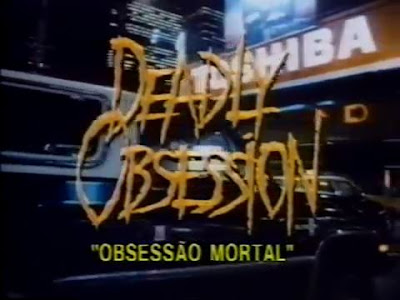 While most slasher films have their villain prepping up for a night (or day) of bodycounting under the name of vengeance, food or, in a few cases, love, this rare title opted for a more materialistic gain: a million Dollars!

In this movie, an insane grump going by John Doe works at a New York campus as a maintenance worker, bearing a grudge against the highly privileged. He storms up a plan to plant a poisoned carton of ice cream in the dorm's tuck shop and demand a million Dollars from the school in exchange for information of its location. Denise, a freshman, unknowingly ropes herself to this scheme when she gets to the tainted treat first, with John stalking her into the dorms to witness her fatal poisoning.

Unfortunately for him, Denise survives and ignites an investigation which jeopardizes his zealous get-rich scheme. Fearing Denise might identify him, John becomes obsessed with her and tries to finish the job himself, taking along the lives of anybody else who might get in the way.

A hybrid of crime thriller and slasher horror tropes, Deadly Obsession (1989) runs a clunky story that needs a bit of polishing as it clumsily juggles horror cliches of virginal final girls and dumb cops with police procedures and terrorist drama, often at the cost of how it handled some of its more suspenseful scenes. Nevertheless, film does have its moments that kept it a unique watch among slasher horror titles, not much to make this a hidden gem but still enough to be a fair one-off

The villain's motive, for one, puts our killer closer to movie maniacs with more purposeful reasons for being murderous creeps, something we don't often see in a slasher movie of this grade. The amount of cheese is also a guilty pleasure worth mentioning here, reeking strongly within the film's synthesizer scores, odd script and hammy actors who put their best foot forward to make their insane line work as much as they could try.

The horror elements do need some minor work, more of which to do with editing and lighting as seen in one chase scene that took forever with hardly anything visible. The bodycount isn't that high either, but when it wants to be thrilling, Deadly Obsession (1989) still manages a decent stalk-and-stab act once in a while, leading to occasionally violent attacks and a watchable final pursuit/cat-and-mouse chase taking place within the campus dorms.

Deadly Obssession (1989) hangs very far from being a rare unsung classic, but its cheesy and crazed attempt to mash ransom thrillers with dead teenager horror have its little highlights as a small obscure slasher for the slasher completists.

Bodycount:
1 male repeatedly jabbed on the chest with a pike
1 female seen murdered
1 male seen stabbed on the head
1 male stabbed through the throat with a syringe
1 male shot dead
Total: 5
Posted by Kaijinu at 4:04 PM