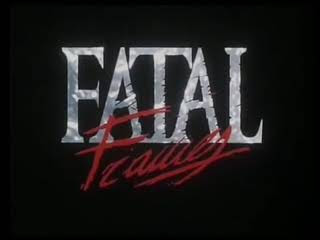 So here we have an Italian giallo released midway into the 90s, couple of decades past the spaghetti crime thriller's golden years. It has all the workings of a stylish 70s Italian murder mystery, taking cues visually and thematically from films like Mario Bava, Lucio Fulci and Dario Argento, as well as star giallo familiars like Ugo Pagliai of The Red Queen Kills 7 Times (1972) and Suspiria (1977)'s Alida Valli, plus Western horror icons Angus Scrimm, Donald Pleasence, and Linnea Quigley in cameo roles. Promising, right? Well it would have been if the whole damn thing wasn't a two hours long of dull "tribute" to the giallo sub-genre as dampened as an overused cutting tool.

Still bummed after finding his wife decapitated in their own apartment, American music video director Alex Ritt (Rick Gianasi wearing a mane that would many any stallion jealous. Or confused) decided to take a music video job at Rome to help launch Italian singer Stefania Stella's career overseas and, too, take his mind off all things relating to his recently deceased life partner. Trouble, unfortunately, say nae to that and just happen to be right around the corner as a figure cloaked in black and brandishing a machete decided to terrorize Rome by hacking to death one of the dancers Alex wanted to meet later that night.

With Alex witnessing the crime, he immediately flags down the cops who proceed to find absolutely nothing. No body. No blood. No weapon. Confused but puffing up air of assurance, our long haired protagonist tries his hardest to convince everyone that there is indeed a murderous figure out in Rome slicing girls apart, but only to come out suspicious with his short temper and refusal to cooperate any further with the police. The officials, after receiving a tape recording of a murdered woman, would soon find out that Alex could be telling the truth and ties the kill with that of a certain "Videokiller", a serial slasher who have been terrorizing the US soil by slicing up women and video taping their handiwork, before sending the records to the cops. Has the "Videokiller" found their way to Rome to start a new killing spree? Or is it a copycat who somehow struck a demented motive to terrorize Alex for reasons unknown?

Looking through the bog that is Fatal Frames (1996), the movie definitely has most of the familiar elements associated with an old school giallo such as a fedora and glove wearing killer with a fetishistic motive, a focus on police work and amateur snooping, and red herrings getting offed in bloody yet stylized ways, complete with slow mo's and tinted lighting. These bits of spaghetti mystery goodness would mean well with a competent story but that is where Frames more or less tripped and fall over and over, resulting to a subpar interesting but overall idiotic plot that I'm sure could have been done and over with a bit sooner given that the characters and the production itself would stop doing one dumb decision to another.

Basically, there's a reason why Frames has a running time of two hours despite having a considerably straight-forward story compared to the giallo titles it is inspired by. The direction can be sum up easily as repetitive, cycling from unlikable an uninteresting characters getting shook up by a murder before going into the police procedural route to our long-haired lead trying to bitch his way out of the predicament, only to fall witness to yet another murder that mysteriously cleans itself up.  Making matters worse are the random intermissions of Stefania Stella music videos that's supposed to be alluring, but all they did was wig me out from the sheer amount of ego it reek, as well as halt the movie for no other reason than just to showcase some 30 something "Pop Sensation" and her very confusing assets with little pay off that matters. Wash, rinse, repeat.

Scripting for the film may as well added more dents to the far from sterling production here, seen from the number of actors with possible little grasp of English (Stefania being one of them, gods help me), reciting concerning dialogue in robotic tones. Heck, even the stars this movie managed to snag from the States couldn't help delivering their dialogue like toddlers in their first school plays, like Angus Scrimm from the Phantasm series doing a bit of ghoulish exposition as a spooky cameo ranting about our inner urges to "Kill! Kill! Kill!" Halloween franchise's Donald Pleasance also has a minor role here as an FBI agent, though his lines are dubbed over by someone else probably due to the matter that he allegedly died during this movie's filming. (Making this his last film to star in, and that one nod to John Carpenter's Halloween (1978) bittersweet in its hilarity)

What saved this film from being a total car wreck for me were the cheesiness of these performances (I welcome anything that brings me unintentional laughter!) and the crazy twist ending that is needlessly over-complicated. Director Al Festa’s background as a music video director is undoubtedly shown here through the many stylish shots and editing (and the number of focus shots on his wife, Stefania. Yeah, now you know why she's almost in every screen here), but the net result here is still a laughable giallo littered with questionable and wasted performances, too many distractions and a padding problem that could have been fixed through rewrites. Fatal Frames (1996) can be a dreck, but, at times, it is a visually competent looking dreck.