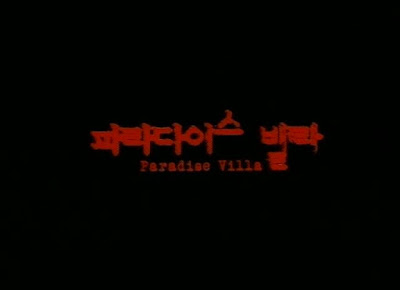 On a regular basis, a slasher movie mostly revolves around a certain group of people (mostly teenagers) either going somewhere remote or getting caught in a situation that have them hunted down by a killer. Paradise Villa (2001) is an example of the latter, with the situation in question being the unstable wrath of an obsessed gamer. (Yep, a slasher movie with a lean and awkward geeky gamer as the killer. Better jot that one down in my list of odd slasher villain choices...)

The movie starts tediously as we watch our gamer play his online role-playing game and starts to lose his shit when someone under the username "Viagra" (interesting pick?) hacked into his account and stole his in-game items. We then shift our attention to the titular villa as most of its residents enjoy a day either by themselves or with company watching a soccer game, while some go about their own little businesses, may it be selling water purifiers or having an affair behind their spouse's back. It isn't long before our distraught gamer simply strolls into the picture, looking around the residence asking random people if they're the thieving "Viagra" before going knife-crazy on them.

What I like about Paradise Villa is that it breaks the usual slasher film mold with its intertwined anthology direction, introducing us to a collection of troublesome yet intriguing set-ups concerning multiple characters, may it be an individual or a set of them. This would have help build the anticipation of getting to see these men and women deservedly snuffed out as a lot of them were written out to have a level of malice and rudeness to them and, for some, they do quite so satisfyingly once our killer rears his ugly head in. But this also meant that we get to see a lot of their ugly sides which really bummed the film down for lacking any likable characters. At all.

Curiously, one of the situations that the movie really got to focus on involves an affair gone brutally and messily wrong and this runs along our geeky slasher's bloody killing spree as the secondary murder plot brewing within the building, pacing about half of the movie's entirety. It's personally an interesting move for this slasher and one that I really wished they focused on instead story-wise since the misadventures of our murderous gamer, while still having some exceptional murder set-pieces here and there, gets old pretty fast thanks to his shallow murder motive and the very matter that he's as disgusting as he is annoyingly whiny. (Apparently he's into corpses. Eww.)

This isn't the biggest drawback for me, however, but rather it's the way the movie ended. Which it simply just did. There's no real resolution. No onscreen consequences. No actual direction. We're just left to watch our killer, seemingly snapping back to his senses after seeing a murder he didn't commit, walk away. Now, I understand Paradise Villa is unconventional but I kinda expected more than just a killer wussing out after all of the murders (and one necrophiliac rape) he committed, possibly cheating us out of a satisfying conclusion, but someone within the production thought otherwise and we're left with whatever the hell this movie considered an ending.

Paradise Villa (2001) looked like it was going to be a unique experience as a slasher flick, mostly resembling a character study clashing with bodycount horror. The production itself looks confident enough to pull it off with its decent actors, occasional good writing and a steady-paced bodycount with passable gore effects, just wished they could have thrown in some more considerably likable characters to even out the unbearable ones, as well as make up their mind whether they wanted the movie as a serious horror thriller or a cheeky black comedy as the unevenness of the tone can be felt throughout. It may be a mess, but it's a beautifully strange mess that's perhaps perfect for those who likes their slasher horror out of the norm once in a while.