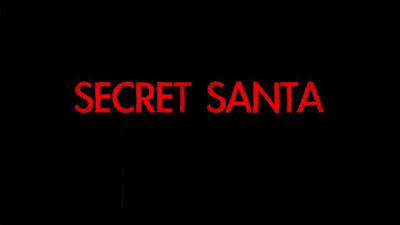 A seasonal slasher with a comedic side, Secret Santa (2015) has the basic plot of college students (and their professor) getting together for a Secret Santa Christmas party, only to have their gifts switched with used garden tools and sharp kitchen wares by a figure in a balaclava, now prowling around the house and murdering them one by one.

It's nothing altogether new save for one or two decent twists and takes, including foreshadowing how our characters will die based on the gifts they received during the Secret Santa gift exchange, the real identity of the killer and the admittedly hilarious "two hour" long monologue as to why they're doing this. (which still made little sense at the end)  And with its short 78 minute run, Secret Santa would have been a quick yet fun little ride down to familiar bodycounting territories if only the rest of its comedy portions were as good as the gory killings.

Even though college comedies aren't my thing, I usually am able to tolerate them in a slasher set-up if the payoff is seeing these teens die a good death at the hands of a decent killer. What I cannot stomach, however, is when a joke seems to be going forever that the punchline felt watered down from the prolonged build up. Secret Santa has more than one occasion of this, which in turn have us waiting until the last 20 or so minutes to get the climactic killing spree, and it doesn't help better the good half of the cliched campus funnies this movie is trying to make work.

Pleasingly, the kills are rewarding enough to make up for some of the dud jokes Secret Santa (2015) coughed up so I couldn't consider this film a total lost. It's definitely an effort with a small budget, one that deserves to be seen and enjoyed for the simplistic cheesy story, few genuine funnies, the overall messy slaughter and nothing else. Check it out during the holidays (or, y'know, any time you want to) if you're in the mood for a not-so-great-but-far-from-bad bodycounter.

Bodycount:
1 female gets smothered with a pillow and a powerdrill to her eye
1 male had his throat repeatedly slashed with a knife
1 male knifed in the head
1 female ran through and disemboweled with an electric knife
1 male castrated with a pruning shear
1 female brained to death with a hairdryer
1 male decapitated with a meat cleaver
1 male stabbed in the head with a screwdriver
1 female ran through with a fire poker, bled to death
1 female knifed in the gut
1 male dismembered and decapitated with a chainsaw
Total: 11
Posted by Kaijinu at 3:42 PM