Have Yourself a Mirthless Little Christmas~ 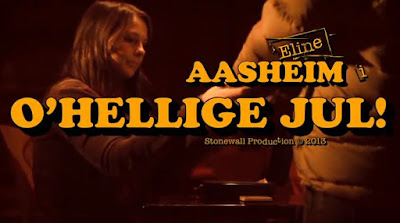 When a movie starts with a family of four beaten, bound and gagged while the perpetrator rapes the mother before putting a running buzzsaw through a baby, you know this is gonna be one fucked up holiday horror.

A mean-spirited callback to the old days of artsy exploitation movies, O'Hellige Jul! follows the lives of friends Eline, Magne and Per-Ingvar as they celebrate the holiday season through festive decorations, pranks and some good ole' brewskies to the point of being shit-faced. Unknown to all of them, they're being observed by a man working at a public welfare agency who's planning to pay them a visit soon and contribute in any way he can so they don't have to worry about the New Year.

The problem with this? Well, this welfare worker and loving family man happens to be a serial killer with a brutally nasty habit of home invasion, rape and dismembering victims. As Eline and her buddies go through the Winter holidays with little to no care in the world, our killer plots his next killing spree and it isn't long before a creepy Santa costume is donned, paths are crossed and a chainsaw's teeth goes through warm flesh.

True to  O'Hellige Jul!'s English title, this movie is cruel in every sense and not just in a manner of relentless onscreen blood work; while the beginning and the end of the movie befits the slasher/splatter category well, the middle run of O'Hellige Jul! is written more as a black comedy working around the bleaker side of the holiday with an almost realistic (and at times, darkly funny) depiction of those living in the lower end of the social spectrum, mostly unpleasant folks wallowing in misery and stress over the hectic (and often costly) yearly celebration. This works quite well to the fact that our killer's normal occupation is that of someone supposed to help these people, creating an ironic yet oddly clever walking and stabbing social satire on the welfare system, though it can divide the audience as this chunk of the story can get really slow with its pacing, and attempts to build character and tone can lead almost unwatchable obnoxiousness.

The exploitative portions, thankfully, deliver the best bits of the movie, holding little to no restraint when it comes to grue and unsettling scenarios despite the low budget effects. It's not one for the squeamish, pulling no punches when it comes to taboo subjects such as assault, infanticide and random acts of violence, but lovers of dark and gritty cinema certainly will find something to like about this movie, particularly the last third of O'Hellige Jul! where the savagery is at its worst and the final product is foreseen bleak, thus a very welcome payoff to a slow middle act.

Less of your paint-by-number slasher horror and more of a gore-filled grindhouse grit,  O'Hellige Jul! is a film that pushes the boundaries of shock value and explores the more realistic array of cinematic scares on the side. It is no mean a masterpiece as a holiday horror flick considering the, again, long and slow middle run, but I do appreciate the efforts the filmmakers made to put something daring and strangely natural on a horror film. With its cast of amateur actors giving the film an air of near fidelity, O'Hellige Jul! definitely has the potential to be better with a bigger budget or slicker direction, but for what we have now, I recommend this title only to those with a strong stomach and a love for good underground shlock.