One Two, Another Freddy's Coming For You: Axe Grinder (2006) 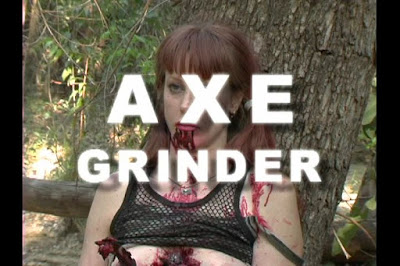 I was lazily browsing the internet one time, just passing the hours before I go to sleep and wake up for work in the following morning, when I came upon a screenshot from a movie featuring a killer in a jester's mask. It looked cheap, dumb and utterly not scary, but as you may have guessed it, I did end up seeing it and all I got to say is "I kinda understand why I didn't heard of this until now."

So we begin clowning around with a brief invasion/double murder mish-mash as a trio of clown-masked maniacs murder the parents of a youngish boy while he watches in understandable horror. What's not understandable is that when one of the maniacs catches him, the killer decided to let him live, hands him a friggin knife and his mask, and promises the kid that he'll understand when he's older. Yeah. Uh. What?

Cut to what we can all safely assume is the present, we see a random runner make her way through the backwoods and it isn't long before she's aware that she isn't alone. Many Friday The 13th Jason Voorhees-esque stalking scenes later, (complete with this film's own take on the "Ki-ki-ki-ma-ma-ma" sound bit, only with tiny bells!) the runner gets caught not by our supposed slasher, but a random perv who proceeds to rape her. But fret not, bodycounters! For in comes our masked murderer for real, hacking the perv dead with an axe and impaling the very girl he just saved through a dead branch. Slashers, eh? What charmers!

We then shift our attention to six campers as they do the usual camping stuff from telling ghost stories while roasting weenies over the open fire, to having either drunken or masochistic sex that more or less ends up with one of them feeling quite unsatisfied. (Or freaked out!) As usual, the killer soon makes their way to murdering these kids one by one after dealing with some other random victims, but who could this killer be? That one camouflage-wearing forest dweller living off the land? Or is it Freddy Palmer, a psychopath rumored to have died in the very same woods a long time ago after an angry mob burned down his cabin while he is still inside?

What could have been a zero-budget knock-off of a later years Friday the 13th sequel, Axe Grinder (2006) tries its best to make something very unique out of the backwoods killer premise, a feat I would normally admire and overlook any budget restraints given the overall result will be worth being patient for. And to be fair, Grinder was a fun watch for its hokey acting and gore-effects, even if its obvious lack of production money did get in the way once in a while, but what made this film less enjoyable is that it suffers from continuity-cum-editing issues, leaving a couple of scenes rather confusing such as the killer switching clothes from one moment to the next (May have been intentional to build some sort of read herring but, yeah, this could have been done better if that was the case!), to some victims suddenly coming back to life (or surviving a very fatal attack) for no explained reasons at all. I would have just laughed these off as bad production funnies but when it got in the way of a good (or in this case, passable) story, then we have another thing going against me.

Axe Grinder eventually ends on a lackluster note, playing on the typical "was the killer real or not?" shtick with an obvious answer, leaving me quite unsatisfied with the finale and somewhat with sour taste in my mouth. Then again, what else would I expect from a zero-budget slasher flick? I will admit that it's laughably bad production and relatively simple story can be plenty enough reasons for some to watch it, but to keep it? I say nay to that! It's really forgettable, falling and blending in too well with the rest of everyday Do-It-Yourself horror flicks that keep popping up in numbers every year, so unless you're into very obscure horror movies or that big of a slasher fanatic, I suggest giving this one a skip.