An Apartment Cuckoo Bird: The Landlady (1997) 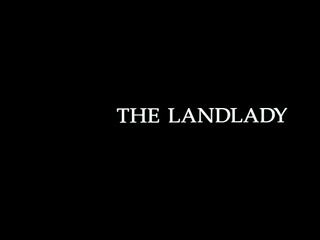 After killing her unfaithful husband by feeding him something he's severely allergic to, Melanie (Talia Shire) moves out to an apartment complex she inherited from a late aunt, taking in a job as its landlady. There, she gets obsessed over Patrick (TV series Heroes' Jack Coleman), a handsome resident in a loving relationship with his girlfriend. Her obsession accumulates from creepy schoolgirl crushing to secretly installing a two-way mirror in his room so she could watch him to eventually killing off those she deems as threats to her "relationship" or coming in too close on finding out what she's really up to.

The Landlady falls comfortably within the lines of 90s bodycount thrillers that features everyday people being unexpected psychos from killer nannies to evil extended families, most of which follows the predictable formula of everyone (save the protagonist/s) not knowing just how crazy the titular psycho is until it is too late. In this film, we get a slightly different turn as we mostly follow the steady transition of a meek and partially-conservative widow into a growing obsessive with a Misery-inspired lust over one of her more handsome tenants, creating elaborate set-ups to either get what she wants or rid the building of its more undesirable apartment owners when not plainly getting her fingers literally dirty with straight hands-on murder.

Due to this, the film can be a fun watch for Talia Shire, famous for playing Mrs. Balboa from the Rocky franchise, hamming up a performance fitting to the craziness of her character, which is a saving grace for the film's TV-movie quality low-level thrills and lack of bloodletting. It comes considerably short when it comes to plot but with its creative focus more centered on the creepy scenes and unsettling moments, I can't say The Landlady failed to bring out some level of intensity and chills.

Aside from these little pieces of good notes, I can't really say anything else about The Landlady. It's averagely good for how absurd and hectic the story gets and the cheesiness it reeks that calls for some unintentional laughs, but that's more or less it. A minor thriller with a tongue pressed firmly on its cheek, made sincerely for those who doesn't mind following a serial murderess' misadventures, so if this is your cup of tainted tea then sip it up and enjoy the modest shlock.

Bodycount:
1 male suffers through allergic shock
1 female beaten to death with a fridge door
1 female swallows pills
1 female bludgeoned with a candlestick
1 male shot
1 male knifed on the back
1 male pushed down in a flight of stairs, crushed by a dropped case
1 female shot
Total: 8
Posted by Kaijinu at 10:52 AM