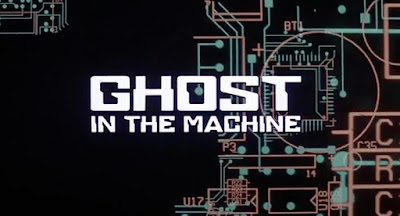 Ah, the early 90s! When rap music is white-ish, neon baggy jeans make you look ghetto edgy and The Price Is Right is hosted by Bob Barker. Oh, and bulky computers with dial-up! Yeah, how can we 90s babies forget that screeching monstrosity? I mean, what could be worse, right?

Well, how about a horror movie trying to be hip and modern by featuring a killer that's pure data-cum-electrical energy, tossed around like toss salad with all things techno-babbled?

Thus the story of Lawnmower Man (1992)! I mean, Shocker (1989)! No wait, Ghost In The Machine, a slasher film where a serial killer dubbed as The Address Book Killer (Coz he kills people he looks up from address books. Duh.) gets his soul digitized after catching himself in a car accident and dying whilst being CT scanned during a thunderstorm, henceforth finding a way to go anywhere and into anything that runs on electricity, making everyday appliances like dishwashers and microwaves murder weapons though in a much more exaggerated manner.

With this new god-like state, our slasher decided to target one of the customers from the computer shop he worked at, a single mother who left a digitized copy of a page from her address book for his techno-rampage, killing his way through friends and acquaintances if not inconveniencing terrorizing our hapless mum and her son with creepy messages, unsolicited purchases and drained bank accounts. It's not long before the feds (well, one guy from the IT division to be more exact) catch wind of the situation and start investigating, realizing that what they're up against is far from normal.

So, pros: I like how some of the murders here act like proto-Final Destination accidents, such as one involving a car crash testing site with an unexpected (and darkly hilarious) twist, and the whole movie just has this very cheesy vibe to everything despite desperately trying to play itself seriously. Kinda hard to do just that seeing all of this comical-looking 90s CG being passed off as scares and the entire movie just feels like one huge time capsule, complete with the fact that everybody involved in this film doesn't seem to understand how this technology works. Like properly works. (Then again, this is a horror movie so, I guess exaggerated facts are inevitable...)

Sadly, strip away all of the unintentional comedy and a few decent looking kills, The Ghost In The Machine barely do much to make itself work any better, giving us stale, dull and personality-challenged characters (villain included) and a very predictable and tedious story that's been done a couple of times before. Granted that the way they defeated the villain in this is kinda new, the entire execution of the film is just too silly to be worthwhile unless you're the forgiving kind with a strange fascination for bad CG, cringy cheese and a moderate level of blood and gore acquired through near moronic means.

A fine film for a single viewing, but far from something I will recommend keeping with your collection unless, as I've mentioned, you're into bad movies. If you are, then by all means track down this poltergeist and enjoy the movie, ya freak of nature...