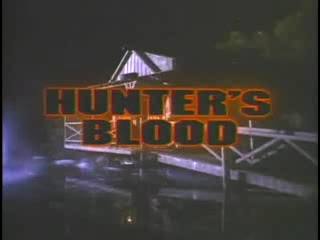 Being a big fan the Friday the 13th franchise, I tend to have a soft spot for backwood slashers. Good backwoods slashers. From classic titles like Rituals (1976), Bloodstalkers (1978), The Burning (1981), and Just Before Dawn (1981), to modern entries like Wrong Turn (2003), Severance (2004), The Tripper (2006), and Hatchet (2006). I love the simplicity of the plot, the craziness of slaughter, and the insane villains that come after our hapless thespians who, in turn, must survive the ordeal within one of the most primal locations in existence. All of this being said and if you're anything like me, then let me tell you about Hunter's Blood, an underrated 80s hicksploitation that is everything backwoods slasher and more!

Going out for a planned weekend of hunting and camping, David Rand (Sam Bottoms), his father Mason (Clu Galager), Mason’s best bud Big Al (Ken Swofford), Al’s brother Ralph, and Ralph friend’s, Marty (Joey Travolta) make the mistake of stopping by a backwoods bar for some beer and wise cracking at a waitress there, angering the not-so-friendly locals. (including a then-unknown Billy Bob Thorton!) Though the boys made it out fine after some fisticuffs, it is clear that the hicks wanted payback for what they did when the shit-kickers briefly chase our hunters on the road and, later that night as David and his fellow city slickers camp out, one of them notices that someone may have been stalking and watching them.

Things go further South (pun intended) that morning when our hapless hunters stumble upon the hicks' own camp while stalking a deer. The creeps wanted a rematch of sorts from their previous fight and Mason takes the challenge hoping that he, his son and friends will be left alone afterwards. Before the brawl gets any uglier, a pair of game wardens steps in just in time to arrest the hicks for poaching, saving our protagonists. That is for the moment as, while on their way back to town, the wardens are ambushed, murdered and mutilated by even more hicks, setting the caught hillbillies free to go after our main men to finish them off, killing Ralph and injuring Mason.

Now with their lives in danger, the remaining three able men decided to split up, two of them to carry Mason back to safety and get help while David goes to distract the hicks away. As the situation gets direr, the more David is forced to channel is inner survivalist to deal with the hillbillies and hopefully makes it out of the woods alive...

Hunter's Blood is essentially the survival classic Deliverance meets proto-type Wrong Turn with a bit of early "reverse slasher" plotting, in which the lead is the one killing off their would-be murderers one by one. It is far from your casual "teenagers getting killed in the woods" gimmick as the protagonists are mostly grown men, but it did factor enough classic slasher backdrops such as doomsayers warning our group to leave because of a possible danger, and too the sizable stalk-and-kill action that, while lite on the actual bloodletting, often goes a little step further post-kill by showcasing some nasty gooey corpses, this including the horrible fates befalling on two game wardens and one bumpkin who gets all twitchy after a blast full of lead to the face.

It's direction is solid and well-paced, helping build the story by focusing some of the quieter and slower moments on our five protagonists before the murderous hunt begins. The scripting for these parts, albeit can be cheesy a few times, has a slight touch of realism to them that makes our five city boys flawed yet established characters. The same can't be said for our killer rednecks, though, as while they do look far more normal from the over-the-top inbred slasher hicks popularized by the Texas Chainsaw Massacre or Wrong Turn movies, they eventually act like your typical "city folk" hating psychos who won't hesitate giving buck shots and butt rapes to anyone who crosses them wrong. Still, I find this far from distracting since their large count did help create some neat tension and suspense as any of them can simply pop out of nowhere to do harm.

The only flaw I can argue about Hunter's Blood would be how cheesed up the last act was (even more than it already is) with David's wife being thrown in the action just for the purpose of making her the dumb bait, thus further prolonging the finale in an unnecessarily hammy way. We got evil lairs, a supposed big boss that gets killed way too easy, and a groan inducing open ending that spells nothing but further trouble soon after, but it could have been worse (so much worse) so it is rather forgivable as it was still entertaining.

An underrated little gem worthy of any slasher fan's collection, Hunter's Blood might be a little slow and tad different plot-wise from your average backwoods hack-a-thon, but it definitely delivers a decent killcount and even welcomes a bit of realism to create a workable tone. It's no Deliverance but if you're up to some B-flick madness to go with your survivalist movies, then this ain't half bad of a watch!