A House of Mildew and Monsters: The Flaying (2012) 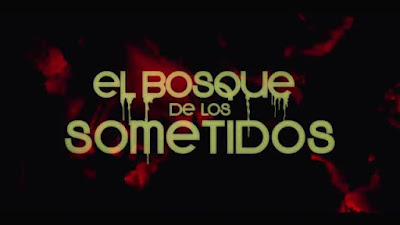 My first Argentinian horror outing! This ought to be fun! (Hopefully.)

Taking place in the 70s, four teens were driving across rural Argentina on their way to an illegal car race when, after camping out for the night, they wander off one morning to explore the backwoods and discover an abandoned castle. Curiosity draws them inside the derelict, only to find living in there is a strange group of misshapen men who tortures and murders anyone unfortunate enough to enter their ruined home.

Clocking for only 76 minutes, The Flaying is an odd and trippy love letter to psychedelic 70s horror, preferably The Texas Chainsaw Massacre (1974) and Bava/Argento Italian gialli. It isn't much of a movie with a strong plot per se but I find it more of a practice of nightmare horror as the further the story goes, the more it shifts away from the mundane to something bat-shit insane and confusingly fantastical.

This said, there's minimal dialogue to go around, most of it taking place at the first 50 minutes where the movie tries to build itself up like your usual countryside slasher flick. Relationships were established, characters get somewhat developed, and a choking and impending tone starts to linger about, though the repetitive interjection of nature shots and "walking scenes" for padding made the lack of scripting and budget a bit more obvious and distracting. Thankfully, after the discovery of the castle and one of the cast was found wheezing from something (a strong emphasis on "something"), The Flaying found a way to use these limitations to the story's advantage and the result is near effective.

The last act is where the film finally got to the horror elements and it is unsettling; everything by this point are mostly done through body language and The Flaying sort of becomes this small yet strongly expressive piece of Hell. Nothing makes sense apart from pain and torment, and the lack of explanation to where the castle's freaky inhabitants came from and why they are doing this just works in a nightmare logic sense. The make-up used for these demented residents are wonderfully done, more or less showing where most of the budget probably went to. The way they are portrayed, sickly thin and grimy, near-naked and flinching in movement, somehow makes up for the small and offcamera kill count in favor of creating it's "inescapable dream" atmosphere, and the very fact they live in a crumbling castle just heighten the grimness of this act, invoking claustrophobic uneasiness further triggered by the use of low-glow colored lights and a creepy animalistic score.

Top it with a strange last shot that most likely spells nothing but more trouble for our survivor and we get this flawed yet sinister looking indie foreign horror of our time. The Flaying may not do much as a solidly structured and well-paced story, but it delivers scares and creeps so, in its simplistic slow-burning way, it does the job quite alright. Not a bad 70s horror throwback from a country that isn't well known for producing horror flicks, so should you ever get a chance to see this, I say give it a go, especially if you're one who prefers a bit of psychedelia with your dead teenagers!