An Eye A Day Keeps The Blindness Away:Child Eater (2016) 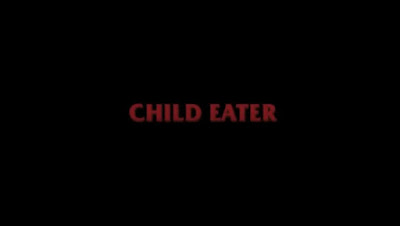 Convinced to babysit Lucas, the son of her father's recently widowed friend, young Helen expected nothing else but the usual night of scary movies and scheduled bedtimes. However, Lucas appears to be uneasy that evening as he have been spotting a strange old man prowling around in the woods nearby his house. Of course, Helen dismisses the issue as merely the boy's imagination, but all of that changes when he disappears from his room and an old legend, the almost blind and cannibalistic Child Eater, returns to feast on fresh young eyes in his insane and desperate attempt to keep his sight.

Now, Child Eater is less of a dead teenager slasher movie in the likes of Friday the 13th (1980) or Halloween (1978), and more in line with monster films with a very slasher-inspired villains like Darkness Falls (2003) or Jeepers Creepers (2001). There were actually a lot of chances that the film could have gone with the classic slasher route, mainly with the very fact that it features yet another babysitter in peril (the typical final girl choice) with an added bonus of an Ahab/doomsayer hybrid with vengeance in mind against the monster, but instead Child Eater decided to focus more on building its mythos and setting its tone through a lot of creepy imagery and stalking scenes.

I personally find our titular shriveled freak and his mythology as one of the movie's greater elements, with few contrasting explanations given to who and what he is working their magic to keep the ambiguous creepiness of our monster as much as possible, despite a stronger emphasis on the Eater being an obvious supernatural foe. Furthermore, it's also quite interesting to see evil on two legs keeping its kills on a tooth and nail level of savagery. I honestly have no problems with this as I already have my fair share of decent slasher titles in which their villains are more in touch with their beastly side (such as The Unnamable (1988) and Humongous (1981)), though I will admit, the kill count could have used a couple more bodies.

With all of these being said, I could like Child Eater for the villain alone, but this monster comes with a movie full of characters that we are supposed to feel for and, to be frank, I find it hard to do just that; though I will admit there was some effort in the acting department, I just can't help but feel distracted by some of the casts sounding and looking like as if they are reading their scripts in front of them, which is obviously not a good thing if the movie has a stronger focus on story and dialogue. A few important characters such as our lead girl Helen and kid-in-peril Lucas did manage to be more tolerable, but not enough for me to actually feel for them as they hardly broke any new grounds as classic horror thespians.

The budget is relatively restraint, with most of it likely used for the little special effects this movie features which, I admit, are delightfully gory and ambitiously modest to look at. Pacing is slow at first with all of the development taking place, but at least the stalk and chase-heavy last act made the wait worthwhile. In the end, Child Eater barely made a dent as a new age monster/slasher hybrid, but I will give its many attempts to do so their due as I can tell they really tried and the resulting product has potential. So if you like a good indie horror with villain that tops pretty near high at the creep-o-meter (and possibly open to the fact that the title can be a tad misleading) then I say go for this movie and give it a try.