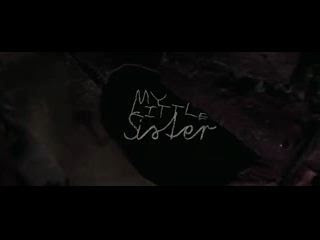 Oh look! A slasher in the woods! Quaint, is it?

In this oddly titled offering from Italy, couple Sheila and Tom are venturing into the woods to meet and catch up with some friends for a fun camping weekend, only to find their friends missing and a random axeman showing up to give them the usual "stay-here-you'll-die" doomsayer spiel which, of course, the two did not heed. It wasn't too long before our maniac, also oddly named "Little Sister", shows his ugly masked face and starts hunting the couple, which soon leads to a formulaic and nearly repetitive stalk-escape-stalk-kill gig that gets really boring quick.

To be fair, My Little Sister did came up with one neat twist to a would-be familiar trapping; it was a neat take on a classic slasher scene in which a victim tries to impersonate "Little Sister's" dead family member ala Jason and Ginny Field in Friday the 13th Part 2, though instead of having it work in favor of the victim at some level, the whole shtick instead backfires and ends up with another victim dying at both "Sister's" and the impersonating character's hand. Apart from that though, I mostly remember being bored by the painfully dull execution of pretty much everything else about this film as it reeks low budget from every corner of the production such as lighting, audio and special effects. Obviously not a great sign this movie getting on my fair side.

The paper-thin story being a challenge already, I at least expected some good tension and plot development from My Little Sister, but the movie definitely overdid the intensity to the point that it all felt overly stretched into nothingness and whatever character our leads have felt more of the same throwaway slasher victims that barely made an impact for me once they bite the big one. There was a neat reveal at the end showcasing what lead into the creation of "Little Sister", but the tag-along twist it came it was hardly that surprising, certainly something we all could have seen an hour before the damn movie brings it up again.

At that, I will say My Little Sister may have sent Italian horror back a few years. It's boring, mostly predictable, and it's really nothing more than one big chase scene between a random horror victim and a random slasher with a stupid name and mask. For those who enjoyed it, I believe this Sister is yours, not mine.