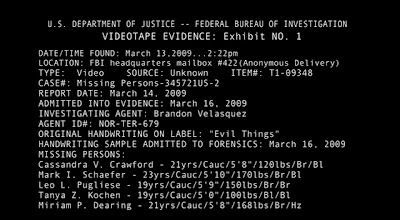 What makes a good found footage film? A feel of authenticity, perhaps? The more it looks real, the better the chance it could cook up something creepy and, maybe, even something scary. And while many tries to pull off the creep factor with something unexplainable like ghosts, zombies and even unseen witches in the woods, sometimes a simple plot with a straight direction is all we need to make a Found Footage workable.

Evil Things took this approach as early as possible by opening the film with what appears to be a notation claiming that this is actually a smuggled evidence from an actual investigation involving some missing college students. The tape showcases five teenagers on their way to a friend's country house deep in the snowy woods, to relax and have fun. What they weren't expecting, however, is that they're going to be followed  by a shady looking van with occupants who seem to have taken a deadly interest on them.

First starting out as a creepy stalking, the group managed to scare the driver away during one encounter and continues to their destination thinking all is now fine. But after one day of nearly getting lost in the woods, they soon found out that whoever was in that van already trailed them, infiltrated their house and began a deadly game of cat and mouse...

The film's pretty short in terms of plotting; nearly everything about this film is something you've probably seen before, from the lengthy conversations to questionable acting. A lot of drawn out scenes are done to fill up the running time and the scares are pretty much basic, however what I do like about Evil Things is that, with its simplicity, it still managed to emphasize the dread and uneasiness of the characters.

The cast are pretty likable despite a few bad eggs. I somehow find them humanly relatable, something I believe helped the movie be a bit more tolerable for the most parts. Sure, they seem lacking on the thinking department once in a while, almost to the point that they are pretty much your usual horror-variety slasher victims, but a majority of their choices have a level of realism to it, albeit flawed.

The last few minutes of the movie is when the whole thing just goes for the chaotic as, one by one, the gang gets attacked by someone or a group of someones who finally got these kids right where they wanted them. The lack of explanation to why the villain/s are doing this kinda works for me, as it adds much to the dreadful atmosphere the finale is putting out for us without dropping a single blood on camera nor does it with overly dramatic set-pieces. Evil Things is simplicity in its finest and most solid, quite an impressive feat given the obvious limited budget these people had to work with!

On a nutshell, Evil Things isn't anything new as a found footage horror flick, but for when it tries to be creepily atmospheric and intense, the build-up to these scenes are quite worth it. A decent addition to fans of found footage, as well as something worth a look for the rest of us horror junkies.