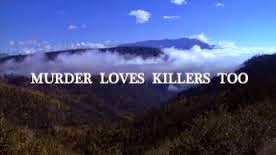 Do-it-yourself horror flicks are often notarized for their lack of production values and amateurish plots, but once in a while we get handmade gems like the Nailgun Massacre (1986),  Truth or Dare: A Critical Madness (1986), and this, a mouthful of a title that is Murder Loves Killers Too.

Needless to say, the story of Murder is really no more than the classic backwoods slasher, with a van full of five teenagers (two guys eyeing to bone their respective girlfriends and one bookish girl who is obviously going to live until the end) driving to a cabin in the woods, only to discover that somebody else is staying there, hiding somewhere in the house only to appear to them, one by one, with plans of ending their fun and their lives.

What made Murder a cut above other shot-on-video indie backwoods horror out there is its approach; while majority of the slasher cliches are present (mainly the sex-starved idiotic teens, brutal killings and an impressive cat-and-mouse stalking sequence), it made a few unexpected turns and twists that no one saw coming. For one, its killer appears to be less of the usual grungy looking wildman or backwoods hick these kinds of slashers normally have and more of an actual guy renting a cabin. In fact, the way he, Big Stevie, dispose these teenagers looked more like some guy grudgingly and boringly doing a chore than a manic massacre, complete with morning robes and fluffy slippers.

Despite his seemingly lack of interest on killing these chumps, he is actually pretty good at it, utilizing the house's nooks and crannies to get around and pluck these teenagers off their places unexpectedly, and the budget for Murder did not strain much to give us a killing spree with an 80s vibe. (though they did get a Torture Porn-ish with that one drill murder but the rest were decent knife murders, some of which done in an cheap yet effective camera work)

This spree ends as soon as it started and we are then left with this awesome stalk-and-prowl set-piece before shifting entirely into a situation quite reminiscent of the original 1974 Toolbox Murders' last act, with Stevie giving some time to talk with one of these unfortunate kids about a matter not all slasher maniacs are so open to discuss. Normally, I would be disappointed, but his little pep talk on why he is doing all of this was just so outrageous, leading up to a unusual twist, that I can't help but like all the weirdness out of it.

So, it sounds like Murder's a pretty swell film to have around and it is, but it isn't without its flaws; not quite much to mock up the movie but the acting from its casts could really use some flair, audio needs some work, and some scenes did took a while to get going. Again, this isn't much to nick the movie down, but I like to see this as a "tribute" to good "bad" late 80s slashers; besides, any guy who can work around his tiny budget and still make a gorgeous looking and humorous entertainment piece like this is well worth our attention.

And to think you know your backwood slashers, here we get a real work of detail and tribute with a small dash of originality; Murder Loves Killers Too will definitely love to be a part of your collection and, too, for a whole lot of open-minded horror fanatics' out there!

Bodycount:
1 female murdered offcamera
1 male drilled through the gut, disemboweled
1 male repeatedly knifed, head twisted to the back
1 female knifed on the gut then mouth
1 male bludgeoned with a crowbar, tongue torn off and shoved down his throat
Total: 5
Posted by Kaijinu at 9:25 PM