No One in The City Will Understand You: Entrance (2011) 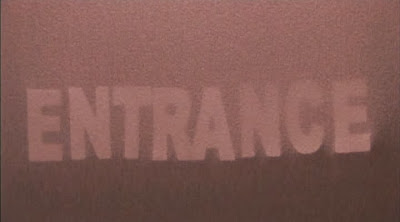 Sometimes a slow burning can go a long way for horror flicks.

Suziey (Suziey Block) is a young barista living in Los Angeles, existing a rather repetitive and uneventful life with her roommate Karen and a loving dog. This lifeless cycle, though, will soon take a turn for the unexpected when she her beloved dog suddenly disappears without a trace, pushing her into depression and forcing her to see that her life is really going nowhere. With this, Suziey decided to go back to her home town and, with the urgings of her roommate and her friends, throws a farewell party for herself and the crowd. All was good except one of the guests wasn't invited.

And he has an axe.

Being a part of the naturalism-focused indie sub-genre known as mumblecore (or mumblegore seeing horror is thrown in the mix), Entrance is reasonably more talk, fittingly devoted a decent hour on the uber-mundane life of a really ordinary mid-20s girl that can strike a little too close to home for some of us, in a sense that not everyone can easily find meaning in their life and some are bound to a routine existence.

Due to this, much of the interests rest upon the lead character's struggles to make something out of her days, all the while the only "horror" scenes happening were two stalkings (one hinted and one eerily obvious), strange noises, and Suziey's brooding sense of paranoia and depression. These are the reasons why the sinister extremes of the last twenty-something minutes, when most sense of realism disappears and we are suddenly thrown into this hectic and utterly nightmarish situation involving a mad axeman and a rather quick massacre that still hits the right way.

While many of us saw it, we never knew how hard it will pull its punches, which is a lot to say seeing majority of the killings were done offcamera and we were never given a full reveal to who and why all of that just happened, all except that the killer had sometime taken interest to our girl. It's as creepy as its disturbingly open ending which spells very little hope of a happy end for either us or our lead.

Being more of a character study than a slasher flick in its ratio, Entrance marks filmmakers Dallas Richard Hallam and Patrick Horvath's good sense of timing and direction for this slow burner, rightfully rewarding any patient viewers with all the promised goodness a bodycounter can provide. Though it is low on the skin, exploits, and blood, the film skillfully makes up for this by showering us a decent lead actress that knew how to portray the troubles and hardships any normal person will live through (over and over again) as well as those that anyone of us will never expect (Again, masked maniac killing all of your friends while your screams for help are drowned by the rest of L.A.), somehow managing to carry the entire film with just her presence.

While obviously not a total winner for just any horror junkie, Entrance is a nice deviation to the similarly routine build-up of a classic slasher, a well-deserved lookie-look for any true hack-a-thon fans out there who just want to stray off the straight path at least a little bit.