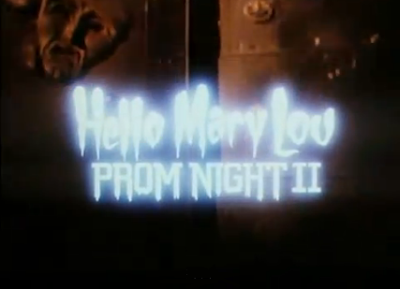 From a masked madman seeking revenge for their sister's death, to a supernatural she-bitch hellbent on winning Prom Queen. Definitely a transition that made no sense but it's here so I guess we just have to roll with it.

Hello Mary Lou opens with a trunk hauntingly opening by itself and warping us to 1957, when the titular nightmare gal was up and alive, enjoying what will be her last prom night after ditching her date Billy Nordham (played by Michael Ironside both as a teenager and as an adult, both with a thinning haircut) to play hooky with another boy in media res of the celebration.

Understandably pissed, Billy decided to ruin her ex-date's prom queen coronation by lighting up a stink bomb some pranksters left. Unfortunately, the fire from the lit wick caught Mary's dress, setting her ablaze in front of everyone before dying an agonizing exit.

Fast forward to the present, we now have Vickie to focus our attention to as she prepares for prom with good hopes seeing she's one of the candidates for winning prom queen. She has some supporters, a good bunch of friends to hang out with, and a dashing badass boyfriend (who is also the son of Billy, now the school's current principal), but on the other side of the coin, she also has an overbearing zealous mother and the ever-present bullying mean girl/prom queen rival to face along the way. It all leads for the worse when, after rummaging through old school props, Vickie opens a trunk containing Mary Lou's prom dress and tiara, somewhat reawakening the girl from hell as a vengeful specter haunting and possessing Vickie to carry out a bloody massacre from the beyond.

Best described as a mad dab melting pot of The Exorcist (1973), A Nightmare on Elm Street (1984) and Carrie (1976), expect less of the whodunit axe murders and more of the supernatural shenanigans as the teen slasher gig was pushed to the very last third of the run, spending a good chunk of an hour with our leads trying to figure out what is obviously (for us, the audience) causing the weird hauntings. In fact, the only real connection here with the original 1980 Jamie Lee Curtis powerhouse original was that both took place in Hamilton High.

Of course, this being a late 80s teen horror flick, you can expect this supposed sequel to be cheesed and sleazed up, which is a really passable approach seeing how fun it made this film despite its oddball premise. From possessions implied via tar pit chalkboards, weird dreams involving random 50s greasers, creepy poltergeists scenes with a demonic rocking horse, its little on the scare factor but the bad taste entertainment made the bodycount enriched third act well worth the wait.

And speaking of which, the teen-kill-fest worked quite well here thanks to the presence and style of our titular killer's rampage, balancing a Freddy Krueger-inspired wit with a Carrie-inspired fantasy-based killings like a cool locker crushing (with bonus soapy brains) and a wicked "shroud attack" that teases just in the right way. Under that note, the character of Mary Lou Maloney also comes out as a rather underrated villainess whose limited screentime didn't do enough justice with what can be done for this character. (From what we can tell from the opening act and the scenes when she had taken over Vickie, she's a real number as a nightmare date big on the evil personality. Thankfully, we get to have more of Ms. Maloney as an active baddie in this series' only true sense of a follow-up, Prom Night III: The Last Kiss, but that will be a story (Or review) for another time. )

In the acting department, not much can be said for the casts as they were rather bland; Michael Ironside is the only name any horror fans can recognize from the roster and he is practically good in his role here as both a teenager (with, again, a thinning haircut) and as a father to a son who might be in danger. (Not much I can say about him being a principal. He kind of just sits there) Vickie actress Wendy Lyon was also quite alright in her role, playing two sides of a coin as both a troubled yet good natured next door girl and a sexed-up prom bitch. Some characters did try to make themselves more interesting by having a few scenes that appears to be made just for them, but as a part of the whole flick, it did little to elevate anything.

These, of course, did little to dent the movie as an entertainment piece and I find myself liking it enough to tolerate the bad acting and bad cheese. A supernatural slasher with a goofy yet serviceable mock-up of all things weird, cheesy and 80s, Hello Mary Lou: Prom Night II just requires a lot of patience and an open taste to enjoy. Have these ready on your head and you're bound for a fair time with a hot 1950s prom angel from hell!

Bodycount:
1 female set ablaze by a bomb wick
1 female hanged by an elevating shroud
1 male stabbed on the face with a crucifix
1 female crushed inside a flattened locker
1 female crashes through door
1 male electrocuted
1 female impaled by a falling light fixture
Total: 7
Posted by Kaijinu at 9:29 PM