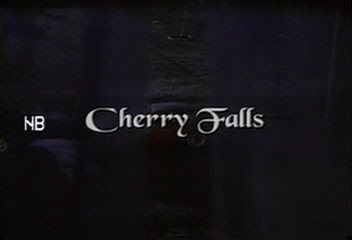 In the small, sleepy town of Cherry Falls, a bag-haired psycho is murdering teens. And not just any teens: virgins!

Looking into the murders in a more mature and productive manner, Jody goes through rocky personal relationships and friends falling victim to the killer, only to discover the town's own little skeleton in the closet that's unsettling as it is grim.

In total inversion of the typical "virgins die last" rule, Cherry Falls would have been a nasty piece of work that broke a lot of taboos and delivers a fresh take on a typical 90s slasher. Unfortunately, the censors just have to crash the party and slaughters everything to a tameness of implied orgies and offcamera killings. A tad shame since the plot is certainly something that's worthy of mention due to its originality and ballsy theme, a first of its kin to do something as mean spirited as murdering teenagers who are just being responsible for their own good.

Much of the film has its focus on the whodunit factor, which in turn answers a lot for its tame display of death and copulation. The mystery isn't a tough one to decipher but the revelations did call for something unsettling, much of it involving the killer's motivation for their murder spree. (And a perfectly credible one, if I may add) The somber tone of these reveals help put the movie's last third to an unexpected crazy turn, throwing out the moody aura to give way for something awfully chaotic, complete with a slasher going frenzy with the knife and half-naked teeners stampeding for their lives.

Acting from the cast also helped keep the film as interesting as possible; Brittany Murphy takes the role of our lead with much sweetness and realism of an actual teen girl. Michael Biehn originally turned down his role as the town sheriff when he dismissed the script as that for another slasher (and it is in a way) but otherwise gave in after much coaxing and delivers a likable performance as a dad who really loves his daughter and a sheriff who loves his town.

Everybody else is weird for the sake of weird; to be frank, I understand teenagers these days are more open to their love life, but was it really appropriate to talk about spooning each other right after some of your classmates got killed off by a maniac? And given that said maniac is only targeting virgins, the best solution is to organize a fuck-fest? Okay, so you're alive today because the killer did not smell virgin from you, but what does that say about unwanted pregnancy? Or STD? Not wanting to be the sore thumb here, but I'm pretty sure most of us slasher fans would like to see some of these idiots get killed onscreen.

If they've stuck with the original script, Cherry Falls would have made slasher history for the new millennium. The end results, instead, is a slasher movie that had potential but grounded to the point that it can be easily dismissed as just another dead teenager film. Well, make no mistake, Cherry Falls may not look like much from what the director originally intended, but it has enough of the first draft to make it stand out among any slashers of any generation.

What else can I say? Pop it or die!