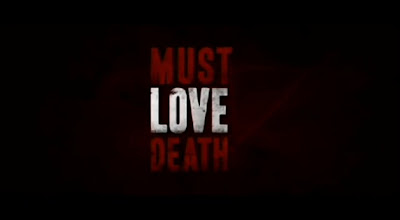 Norman is an ordinary guy who's just out of luck when it comes to love; suicidal at best, he meets up with a group of willing participants of a suicide pact deep in the woods of nowhere, in hopes of ending his miserable, loveless life once and for all.

Or so he thought.

The group turned out to be ruthless killers who are looking for victims to torture and Norman just fell to their trap; as he struggles to outrun and outlive the bystanders victimized by the killers, he recalls his last fling with love, of how he met the girl of his dreams and how she came crashing down to his life like a speeding car. Literally.

Must Love Death is two movies struggling to connect with one another through a series of non-linear story telling; much of the horror concept is occurring in the present, while the romantic sub-parts are told via flashbacks, trailing slowly to what had lead to the predicament our main character is in. 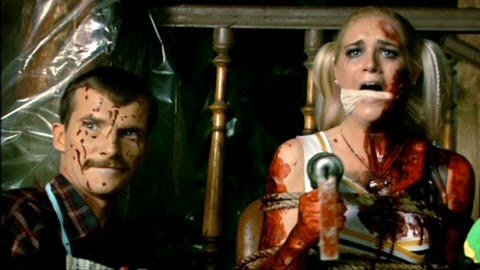 As much as this is a sweet idea for a rom-com-gorno, the flaw from this movie is that the execution needed a little work; the two sub-parts of this film are precisely everything you could have seen in their respective genres. The only gig is that the horror part does had its gritty and intense moments as well as  some fair display of gory goodness; sadly, the romantic comedy half is predictable in comparison and not too romantic nor comedic for my taste.

May it be the banters or slapstick/splatstick shenanigans, the jokes didn't quite catch up too well with the shifty tone of the movie, but as a horror fan, the torture scenes did enough justice for me and made the movie bearable enough to sit through. It's nothing original, but scenes involving demented hicks videotaping their murders in a mock game show fashion are always welcome, especially if it involves forcing a man to show his foot through a screwdriver, or have a couple forced to kill one another to survive.

The film soon ties up to an ending that was thankfully more horror inclined, though one can imagine why this film isn't too well discussed due to its cons. It did try to make something out of the ordinary, may it be a torture porn or a chick flick, but with a better acting cast and a stronger (and more imaginative) execution, Must Love Death would have been a welcome addition to romantic horror films out there such as Shaun of The Dead and Tucker and Dale vs Evil, but for its worth, I would say it'll make a good single day's rent.