Taking cue on films like Friday the 13th part 3-D and Freddy's Dead: The Final Nightmare, the Final Destination franchise once decided to end their Goldberg-inspired mayhem by jumping into the 3D fad and gave the audience all the explosive and chunky deaths they could come up with.

Personally, I think they oversold the gimmick and just ruined everything.

Friends Nick, Lori, Janet and Hunt were simply spending a day in a speedway stadium when Nick suddenly gets a vision of them and a whole lot of others getting killed by flying tires, projected car engines and lots of crushing. Of course, he freaked out, started a quarrel among nearby folks, got escorted out of the danger zone with his friends and others, and before you know it, the accident came true.

The lucky quartet then tries to go on with their lives, only for Nick to discover that he can see random flashes of images which will turn out to be the Goldberg items for an impending death. We got one vision for each deaths, so you can say goodbye to any tension or brooding build-up and say hello to a cavalcade of CG gore, obviously made this way for the 3D.

So after a series of "shocking" deaths, Nick and Lori got the help of the track's security guard who they managed to save from the crash (thus in death's list) in an attempt to prevent others from being killed by everyday freak accidents. They failed once and then saved Janet from an unfortunate death involving a carwash while Hunt had his insides sucked out by a pool drain. (He was never mentioned again.)

Death then wouldn't take any more lives after saving Janet, leading these kids and the guard to think they broke the cycle and are now safe. This is when the film booked an unexpected second premonition, apparently to pump up the running time since, I'm betting on this, everything would have been done in a matter of an hour.

The only thing that's keeping me from rating this mess any lower is that the cheesiness does have its good side if you're up for something nonsensical and utterly dumb. Few of the deaths are also fun to watch (Read: Few!) and in the shallowest of reasons, the awesome opening credits featuring all the deaths from the previous three films (plus a chunk-stained power drill) done in X-ray. To be honest, I'm trying really hard to squeeze any other positives I can generously share for you about this film but all I am getting are tiny, bite-sized pieces of the good out of the fat folds of the bad. 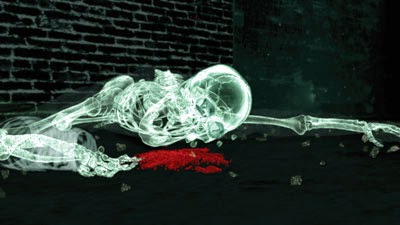 As a sequel, I felt cheated out of an otherwise good entry to one of my favorite "whatdunit" slasher franchise; The Final Destination lost its story and left each character simply to die for the sake of our money and to entertain us. Blood and gore is always fun and this sequel knew that at least, but it'll take more than flying body parts to make a solid sequel.

Guess we all should be glad this wasn't THE Final Destination.

Bodycount:
47 Victims killed in speedway accident
1 driver immolated in car crash
1 female get sliced in half by a blown car hood
2 drivers immolated in car crash
1 female had her head smashed to bits by a flying car wheel
1 male blown apart by an exploding truck
1 female gets a flown rock shot through her eye
1 male gets diced through a gridded fence by a projected gas tank
1 male had his organs sucked out by a pool drain
1 male crushed by a falling metal tub
1 male ran over by an ambulance
1 female crushed under a truck wheel
1 female knocked against a metal pole, internally decapitated
1 male hit by a truck, face smashed against a wall
Total: 61
Posted by Kaijinu at 5:15 PM