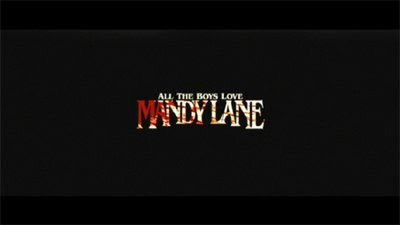 For some reason, all the boys love Mandy Lane. So much so that one of them gets tricked by Mandy's bestfriend Emmet into jumping off a roof and to a pool in an attempt to impress her. Things obviously didn't do so well when the jock missed that much and ends up hitting his head on the pool’s edge. 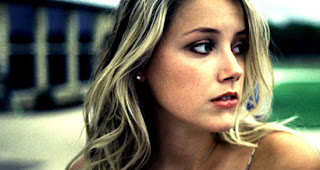 Nine months passed, Mandy and Emmet no longer hang out and the former gets invited to a ranch party consisting of her weight-conscious friend Chloe, another girl named Marlin, and three boys, Jake, Bird, and Red.

Obviously, the boys are all lusting over Mandy Lane, including those who are already snuggling up with a girl, but to cover this motive, the teens spend their time doing the usual slasher victim fare from stealing kegs of beer to smoking weed. They also encounter the ranch’s hunky caretaker Garth, who becomes the apple of Mandy’s eye, much to the annoyance of the other dudes.

Unfortunately for them, Garth isn’t the only boy they have to keep an eye out for; apparently going bonkers from being de-friended by Mandy, Emmet seeks out the ranch and begins offing the teens, apparently all in the name of Mandy Lane.
Shot on the main ranch house of owned by actress Hillary Duff’s family (which was reported to be haunted by a girl’s ghost), All The Boys Love Mandy Lane is an oddity for a slasher movie; working with art house cinematography with a few bonus grain and old school mellow soundtrack, it resembles an early proto-slasher that takes its time to build around its characters before going for the bloodbath. Accompanying this build-up is an admittedly intense sense of openness from not only the premise and its camera work, but also the vaguely natural scripting spelling upcoming trouble that's just waiting for the right time to happen.

There's no doubt this direction tested many of their patience, me included, but what really irked me about this film and kept it from receiving a higher rating is its lack of sympathetic characters. With everyone being either nasty to one another or cheating on their girlfriends, it’s not hard to start rooting for Emmet to start killing these nasty teens. Odd to say, the film spends a beefy 40 to 50 minutes playing drama around these bothersome teeners, acting out an attempt to push the slasher film conventions aside for a coming-of-age horror but seeing the results, it’s a safe bet that they didn't know how to do just that.

The good news is All The Boys still delivers the grue and a good final third that's well worth the wait. While it isn't as nasty as other hackathons released on the same year, the massacre rings plenty of tribute to the bygone days of early slashers, with nasty set-pieces to do away the victims with enough tension and subtle bloodletting to keep fans satisfied. A twist is also provided, but depending on how good you are in spotting curve balls in a movie, this is more or less an expected turnaround, a pretty good one to say at least.

It is pretentious, maybe feeling a bit high and mighty above its bodycounting kins, but otherwise a good exercise of style and murderous death tolling saving the rather hollow teen horror plot from utter obscurity. Calm and serene despite the sense of uneasiness and dread that could happen anytime, All The Boys Love Mandy Lane is a recommended viewing for the patient, the appreciative, and for the curious cats.

Bodycount:
1 male jumps and hits his head on a pool's edge
1 female gets a shotgun shoved and beaten into her throat
1 male shot on the head with shotgun
1 male had his eyes slashed with a bowie knife, stabbed to death
1 male shot on the back with shotgun
1 female gets a bowie knife to the gut
1 male beaten to death with a machete stuck on a cow bone
Total: 7
Posted by Kaijinu at 4:09 PM