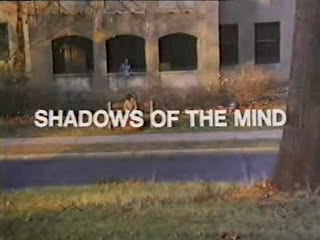 As a child, Elise witnessed her father and stepmother drown while boating at a nearby lake. Feeling guilty that she couldn't save them from their fate, she's been institutionalized since until twelve years later, when her doctor decided she's ready to return to the outside world. Alone and unsure of her own recovery, Elise settles back to her old family estate and not too long, her estranged stepbrother stops by to check up on her, somewhat resulting to a string of various murders.

Coming from Roger Watkins, the same man who sat on the director's chair of Last House on Dead End Street (Though using the pen name Bernard Travis here to hide himself from his own shame), Shadows is a rare, out-of-print whodunit that suffered through a lot of unsatisfying production, so much so that Watkins once tried making a flick showing the stress he endured for this film. True enough, for a movie with a short running time (75 minutes), it took 40 long, terribly acted and oddly edited minutes before the ball got rolling, leading to a fiery yet predictable twist ending that you may or may not have seen coming. (Depends on how well you know this sub-genre)

To be fair, least on my own experience, it wasn't all that bad; while the pacing was a problem, the latter half of the film sat fair with me. Perhaps I was patient at the time and the odd acting didn't bother me much, plus the gothic take on the bodycounting was an added treat. It was atmospheric for most of the time and the murders come off brutal even though they're low in count. By the time the big reveal was shown, it had this cheesy look to it that was simply okay.

I'm not gonna try hard to squeeze out reasons for anybody to sought this film as Shadows of the Mind's obscurity is perfectly understandable.  It's close to being dull and uninspired but there are a lot more early 80s slashers out there that did worse than this. It's moody, considerably bloody and its rarity is a good ringer for collectors of rare and out-of-print trash. See it out of curiosity.

Bodycount:
1 male gets a scythe through his neck
1 male stabbed on the eye with a corkscrew
1 female repeatedly knifed, set on fire
1 male and 1 female beaten with an oar, drowned
Total: 5
Posted by Kaijinu at 1:01 PM