The Troublesome Production of Harry Penderecki: Brutal Massacre: A Comedy (2007) 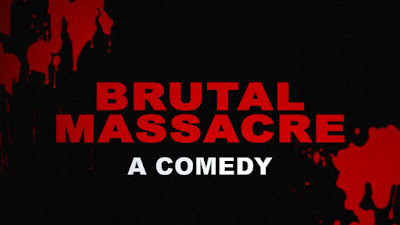 Brutal Massacre: A Comedy (2007)
Rating: ***1/2
Starring: David Naughton, Brian O'Halloran, Gerry Bednob
Many a times I cover slasher movies that lean on the comical side, but had I ever cover comical movies that lean on the slasher side?
Brutal Massacre: A Comedy (2007) is a mockumentary centered around low-budget horror director Harry Penderecki (An American Werewolf in London (1981)'s David Naughton), who hasn’t had a hit since his last opus, I'll take the ring back... And the finger, too!. Itching to make a real name for himself, he sets out to do Brutal Massacre, a backwoods slasher that's going to be his "big one" given everything goes smoothly. Big emphasis on given. 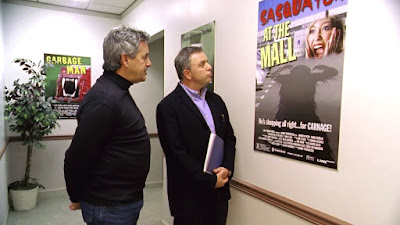 A satire comedy about low-budget horror movie productions, Brutal Massacre's just a real treat from beginning to end as we follow the scenes behind one supposedly infamous (for the more absurd and often hilarious reasons) horror director and his close-knit crew's days of filming, tackling every sorts of mishaps from finding the perfect shooting location and encountering creepy drunk houseowners (one of them looking a whole lot like Texas Chainsaw Massacre (1974)'s Gunnar Hansen. Unless...), to getting the right gore effects guy and surviving workplace hazards. (i.e. firing ranges and the occasional runaway knife) On a lack of a better term, these guys are just screwed with just so much bad luck and bad press that their misfortunes in this one project are simply chuckle-worthy, something the movie wears proudly with its snarky yet kinda intelligent dialogue and a good lot of talent involved. 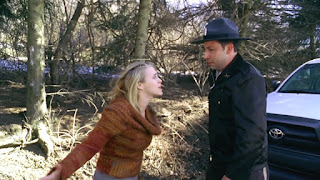 Aside from the aforementioned David Naughton doing his silliest as an inspired yet very down-on-luck director whose self-praising and over-analyzation of his own shlocky projects bring forth plenty of laughs, we also have the likes of other horror icons like Ken Foree (Dawn of the Dead (1978)) and Ellen Sandweiss (The Evil Dead (1981)), and too familiar faces of comedy like Brian O’Halloran of Clerks (1994) and Gerry Bednob from the Steve Carell comedy The 40-Year-Old Virgin (2005) gracing the screen as assorted friends and/or crews just doing their best to get through the filming in one piece and their sanity intact, with or without the cost of their own frustrations, stupidity or, for some people, both. There are some genuine moments of chemistry and timing among these crowds so when a joke hits, it hits the right way. (running gag Gunnar Hansen anyone?) When a joke misses, however, it's pretty darn noticeable at how distractingly "hard" it wants to be (Yes, the rich Texan is funding this movie because he wants titties. Anything else?), but seeing there are more hits than misses here in my book, I'm willing to overlook these flaws for what's really no more than a fun comedy-of-errors that doesn't completely take itself too seriously. 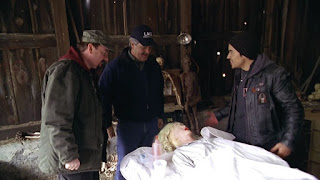 Perhaps the factor that gets me on a really forgivable stride towards this movie is that despite being played for laughs, it is still a caricature of low budget filmmaking; Brutal Massacre is structured like an actual process, one that revels on highlighting a lot of possible issues one might meet during movie projects and as a horror fan since youth, I have a growing sense of fascination of what goes behind the camera and I kinda admire all the hard work these production crews put in making a single movie to cinematic life. Of course, there's nothing that much insightful going on here save for one or two apparently deep moments, but the matter this movie brought up problems like lazy and inept crew members, obnoxious locals and budget restraints and found ways to make it subtle yet funny earns modest points for me.
Yes, it's lowers its bar a bit due to some irregular jokey moments and sometimes questionable writing, but I'm committed in my words when I say Brutal Massacre: A Comedy (2007) is just in it for the laughs and I understand and appreciate that. It mostly knows the darkly funny side of low budget films and I like that it approached a different angle to exploit. If you have an itch for an independent mockumentary comedy about the happenings during that one shooting of a shlocky $1.99 slasher movie you can pick up at a bargain bin, then go get yourself a copy of this and watch out for short Indian cameramen with anger issues. Apparently they have a tick for the term "shot-on-video"...
Bodycount:
1 male accidentally killed by a tossed knife
Total: 1
Posted by Kaijinu at 9:44 PM