Guys and Girls! Girls and Guys!
Come on Forth and feast your eyes!
My wonderful melting pot, she lives again!
Mixing Wishmaster and The Omen!
Out from its brew, a movie so mediocre,
Called Wish Upon, God, I wished I choked there!

Young Clare is your typical PG-13 horror flick teenager; she saw her mum kill herself when she was a wee bit smaller (for reasons obviously connected to the horrible things later), her father's a garbage man, and she's bullied by rich posh kids for being poor. This is basically everything to it about her until she was given an ancient Chinese music box that claims to grant 10 wishes. 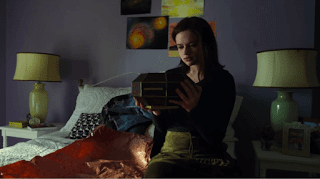 Out of sarcasm (and probably sweet sweet revenge), Clare first wishes one of her bullies to rot alive and, wouldn't you know it, next day comes with a news that her worst bully gets inflicted with a flesh eating bacteria. (like the one in them Cabin Fever movies. Quickly! Somebody push her into the town's water reservoir! Anything to make this film more interesting!) After a couple more wishes coming true like magic, Clare soon realizes that the music box is indeed granting whatever she asks it and she, for a lack of a better term, exploits it.

Of course, as any horror movie dealing with wish granting, there's a price for her newly acquired riches and power as friends, family and pets start to die horribly after each successful wish. Will Clare stop herself from ultimately destroying the lives of many, or will she, more or less (and pardon my French), fuck it up. 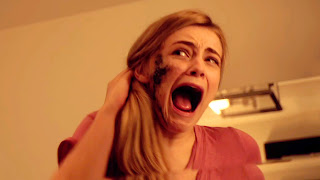 Wish Upon is technically a modern take on the Monkey's Paw story, stuffed with a collection of clip notes from The Omen and Final Destination movies in regards to its death scenes and a bit of (low-key) slasher for some stalking subplot that ultimately lead to nowhere, all in that "diet horror" flavor that comes in oh so many PG-13 horror movies. The story's tone, in turn, strongly resembles a more intense and bodycount friendly take on a Goosebumps TV series episode, skipping the gory stuff for most of the horror scenes and finding a way or two to squeeze in posh girl sensibilities like unrequited boy crushes and popularity wars. I certainly have no problem with this kind of approach, but this is something we've seen for a good lot by now and there really isn't much this movie is offering elsewhere.

The talents involved are okay for most parts, though the genericness of the characters they play did nothing but help make this film more tiresome than it should be. There's a bit of a(n almost) nice turn in the later act wherein the powers of the evil wish-granting music box starts to get the better of our heroine, ending up with her starting to go cuckoo in maintaining her new life and scaring her friends (and one random romantic interest that came out of nowhere) in the process, but this little plot devise only lasted for a couple of minutes, which was a shame since a terrible excuse of a character study would have been more preferable than a methodic route that's paved with blood, death and predictable teen drama that goes more outlandish (and dare I say cartoonish) even for a film about an evil magic box. (time and space travel involved. twice!) 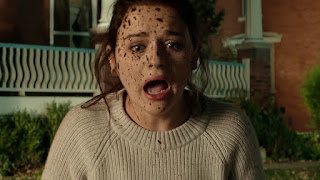 Because of its overly familiar story and stereotype characters, there's barely anything remotely scary or thrilling about Wish Upon in a high grade cinematic sense, no matter how much it tries to re-capture the exciting Goldberg-esque "howdunit" deaths (which were the more "okay" aspects of the movie) or the "down the rabbit hole" spiraling of its lead character's life. (Again, a sorta missed opportunity!) It does reek of cheese and unintentional hilarity during some of its more serious scenes (like a certain bathtub death), though they were only good for a few seconds of chuckles so I couldn't even say that the movie's so bad it's good.

To simply put it, Wish Upon (2017) is forgettable in all aspects of the word. I can honestly say that watching any one of the Final Destination and/or Wishmaster movies (even the terrible ones) would have made a more entertaining movie night and I guess I'll do just that. If you do happen to enjoy this movie then, well, to each their own, I guess...

Bodycount:
1 female hangs herself
1 dog found eaten by rats
1 male slips in a bathtub, hits his head and drowns
1 female had her hair caught in a drain disposer, neck snapped
1 female trips unto a horned statue, impaled through the face
1 female crushed inside a falling elevator
1 male killed (flashback, unknown method)
1 male slashed by a chainsaw
1 female hit by a car
Total: 9
Posted by Kaijinu at 5:51 PM