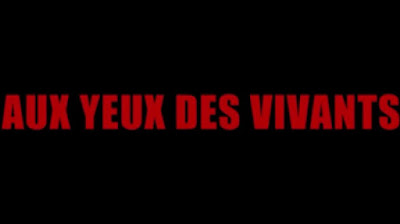 Filmmakers Julien Maury and Alexandre Bustillo are among the few people in the horror community I keep an eye out for mainly due to their movie Inside (2007), a new wave French slasher centering on a pregnant woman fighting off a deranged maniac who wants to cut out and steal her baby. It is extremely graphic and a wonderfully intense piece of modern horror that managed to unnerve me, so much so I consider it as one of the best slashers out there. With this being a fact, I obviously wanted to see more from Julien and Alexandre and, so far with Livid (2011) and that gruesome ABCs of Death 2 short X is for Xylophone, they're doing okay....ish.

From that, we now look into their third feature, Among The Living, which opens one Halloween night in France where a soldier suffering from PTSD gets savagely attacked by his pregnant wife (Inside (2007) actress Beatrice Dalle in a cameo) apparently out of frustration from taking care of both him and their seemingly deformed son. After failing to kill off both her spouse and boy, however, the matriarch decided to end it all by stabbing her own womb instead before slashing her own throat in front of her family. Not wanting anymore trouble to fall on him and his son, the disturbed husband flees the scene with his children (Yes. Children. The now-dead fetus, too), driving away into the night.

Some time later, three young troublemakers, Victor, Dan and Tom, skip the rest of their school day after causing too much ruckus and set off to do some more juvenile fun instead such as setting angry farmers' barns on fire in revenge for almost breaking one of their limbs, or simply relaxing on a row boat at a small lake. But this time, the lads see something peculiar as a tow truck they never seen before drives by and enters an abandoned movie studio, with a car on tow. Following the truck out of curiosity, the boys are horrified to find a woman bound and gag inside the trunk of the car, and a large man in a rotting clown mask emerges to take her away.

After a failed attempt to rescue the woman, the boys are later found by cops (sent to look for them after the barn burning incident) and their story of masked men kidnapping women naturally fell to deaf ears knowing their history for trouble. Their respective families are also quick to dismiss the event as another tall tale, something no short of a deadly mistake when the masked man somehow followed them all home and starts to methodically snuff them dead one by one.

From the sound of the plot alone, I wanted to like Among The Living a bit more than what I do right now, since it is technically a slasher with a child murder taboo-breaking. For most parts, it does exactly that with the clown masked man, now stripped nude and going sortah frontal on us (you'll know what I mean by "sortah" once you see it), stalking and killing the children who bore witness to his crime, mostly taking along whoever else happens to be in the house with them. This is usually a nice set-up to build some intense and distressing scenario and Julien Maury and Alexandre Bustillo definitely show they still got the directional flair to do suspense, shocks and creepy imagery, but I can't help but feel underwhelmed.

I could try to be as shallow as possible and just simply enjoy the horror offerings provided, but the first act of the movie did an otherwise okay job building around the three boys that I really wanted to see more of these kids and their lives. Granted we are given some expositions and even a little glimpse of what's going on in each of their little worlds, they did little to further flesh out the children, which is a big negatory for any main characters as the ambiguity of whether they will make it out of the ordeal alive or not often lies to how well liked and relatable they are. Once the killings begin, the kids and more or less everybody else who get roped in the chaos are easily reduced to slasher flick victims, with half of them dying less-than-spectacular deaths, adding insult to my injuries.

This leads to another issue of mine with Among The Living; now, I understand that a good deal of these killings may have been done in a certain way for artistic flair, but I have mixed feelings with the continuous series of offscreen kills around the middle part of the film, something I find odd since the movie had no problem showcasing blood, guts and aborted fetuses at the opening, as well as continue bringing us onscreen carnage after these portions with the offcamera slayings. To be fair, I do find half of these offscreen deaths quite creative and darkly comical as they used an ominously brightening glow and an intensifying heart beat to imply the character's end, but I wouldn't mind seeing some of these characters get their a brutal comeuppance (Like a certain abusive father) and I personally believed a lot important players were killed off too soon.

Still, as mentioned prior, Among The Living possesses some of the more effectively creepy and intense scenes for a slasher flick, like a good ole take on the popular "clown doll" urban legend and one torture porn-ish murder involving a broken arm cast, a chisel and a foot. The whole tone of the movie even deviates itself from a common slasher as it has that dark fantasy air of sorts with its gypsy-inspired soundtrack, humanoid monsters and devilish cavern-turned secret lairs. Whenever it wanted to be brutal, it does tries its best to be as brutal as it can be, but I can tell there's a stronger priority on atmosphere here.

The killer (soon killers) committing these atrocities is an interesting fellow too, being a disfigured man (?) who has no problem going buff while he prowls and murders. The last time I recall we have a nudist killer would be the butt-naked serial murderer Warren Stacy from the cop thriller/slasher hybrid 10 to Midnight (1983) and, to some extent, the titular Mary Hatchet of the underrated guilty pleasure Blood Night: The Legend of Mary Hatchet (2009), but what sets our nudie killer apart from these guys would be the fact that he prefers to murder using nothing but his strength, impressively seen when he easily breaks a plaster cast and re-breaks an arm. He is eventually joined by his own father (revealed early on as the same father at the opening slaughter) who brought out the more stabby n' slashy killings, with a nice touch of chemical weapons to boot.

Altogether, its issues led Among The Living being dry and uninspired respectively in the blood and story department, but when it comes to creep factor and tone, it still found a way to make a lot of that work despite the lackluster story. I honestly believe this film would have done better if it focused more on building its character and paced its killings a bit, but it's here, existing, so we might as well try to enjoy it. If you love odd French horror films or at least appreciates an atmospheric one, Among The Living might be right up your alley. If you prefer a warmer, stickier and redder slasher flick, you may wanna try something else. Like Julien Maury and Alexandre Bustillo's extreme first feature opus.