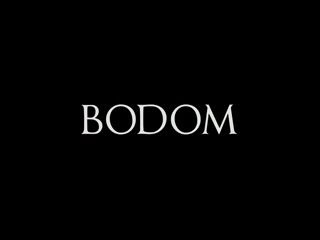 On June 5th, 1960, Finland's Lake Bodom became the grisly site of a brutal crime as four teenagers camping there got attacked by something or someone. It's one survivor couldn't tell much what exactly happened that night, leaving a chilling mystery that lives on to this day, surviving through many speculations ranging from the one survivor being the murderer responsible, to it being the work of a violent 15-year old.

In this film, high schooler Atte is fascinated (or more fittingly, obsessed) by this unsolved murder spree that he devises a plan to recreate the event in hopes of either solving the mystery or at least getting some new insights. In order to do this, he convinced two girls at school, Ida and Nora, to join him and his friend Elias to the lake, though he didn't let on to the girls what he is planning until they finally arrived at the site. Though rightfully upset, the girls settle down eventually and even try to at least enjoy the outdoors with their escorts, but as these "teenagers at infamous campsite" flicks go, something is bound to go wrong at nightfall and the teens find themselves hunted. Just like 40 years ago...

From a quick glance, Lake Bodom is easy to picture as your classic backwoods slasher type but I am glad to say this isn't the case for most parts. True, it has the backbone plot of teens going to the woods to enjoy themselves, but there's a strong self-aware tone to this backdrop and the characters themselves behave very little like your run-in-the-mill slasher victims, each appearing to bear their own personal crosses and are subtle down because of this, effectively selling themselves as near-realistic depictions of teenagers with uncertainties (either emitting them or feeling them) rather than over-the-top caricatures.

For a moment, Lake Bodom even tricked us into believing it will devolve into a cliched slasher narrative, but through a series of unexpected yet perfectly timed twists, not only did Bodom managed to keep itself fresh but it also made its story more intriguing to follow as it switches back and forth from being a dead teenager horror movie to a crime thriller curve-ball and you can't fully tell what's bound to happen next. It's during these twists that Bodom shows its accomplishments as a horror/thriller hybrid, showcasing quality directions and effective nail-biting sequences and stunt work, giving the audience something worth their time and money from what could have been just a simple bodycounter.

I guess if I'm going to produce any kind of nitpick, it'll be the low killcount, though I don't believe this will be a real problem as Bodom's focus is evidently on developing plot and characters to produce its scares and thrills, rather than exploiting gore and blood for shock value. It's a nice change of pace and plotting for a modern slasher, making this film feel something of a throwback to a good 90s teen thriller with a commendable production quality and I will personally say there's always a room for that in this day and age.

With this, I give Lake Bodom a strong approval for not only die hard slasher fans, but the horror fandom in general. It's both simplistic and complex, predictable and unexpected, an odd symbiosis of contrasts that works wonderfully in a slasher/thriller hybrid that's well deserving of its praises and more. Don't you dare miss this.