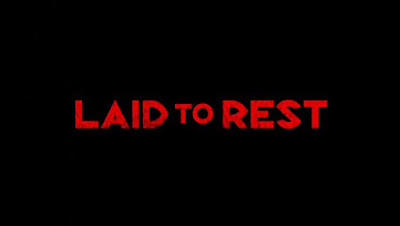 From its own opening credits in which a crazy montage of women being gored, flayed and stabbed in multitude of ways plays from what we can assume is our killer's collection of snuff flicks, all the while guitar tunes grit through the screaming and pleading, it is evident that Laid to Rest is one splatter-friendly film that might just deliver. Might.

After that ruckus, we start the plot with an amnesiac girl waking up from a coffin inside a funeral home, where she is soon made aware that a figure in black, bearing a chrome skull mask and a camcorder mounted on his shoulder is out to, in her words, "make her dead". (Random lady fail English? That's unpossible!) Narrowly escaping her attacker, the girl later gets picked up from a nearby road by a local named Tucker, who lets her stay with him and his wife for the night while they sort everything out in the morning. This, however, only leads to the killer, dubbed Chromeskull (for obvious reasons), to track down his target and begin a stabbing and slicing spree against just about anyone who happens to be around and/or is getting in the way.

And it's pretty much just that. The girl (later named Princess because of a random flashback), her good Samaritan-turned-fatherly bodyguard Tucker and Stephen, a geek who unfortunately gets roped into all of this chaos, going around town trying to find help while Chromeskull makes a killing out of random people as he chases after the trio. Many would argue Laid to Rest's paper-thin plot is a considerable big issue to endure and I say this is justifiable; a chase movie with a killer and a gory bodycount could work as shown in films like The Hitcher (1986) or the obscure 1990 Midnight Ride, and this film definitely shows it has the budget to do more with its crisp picture quality and fair-enough audio work, but it instead went in with the easy route and one can only go so far from introducing multitudes of characters in one minute only to be savagely filleted in the next in a repeated pattern before it can get a bit predictable or even tedious to follow at some parts.

Fortunately (or unfortunately depending on how much stupidity and convenient writing you can digest), an assortment of dumb decisions and horrible luck somehow managed to lengthen and twist Laid To Rest's simplistic (or lack of) story. From Princess going back to the funeral home in hopes of jogging her memory (and getting more people killed. Of course) to a modernized take on the "phone is dead" scenario that most middle-in-the-woods homes seem to suffer from, ultimately leading to no cops showing up until it's too friggin' late, the damning number of these contrivances is nearly comical that one can't help but laugh at how much trouble and death a single bad decision ends up to. This factor, though, weighs little in the dumb department compared to who should be our sympathetic lead girl, whose attempted excuse for being as troublesome as a goddamn toddler is her lost memory. I guess the film was trying to make her sympathetic through what's technically a handicap, but yeah, I'm no doctor but I don't think Amnesia works that way. I could be wrong, of course, but the matter of fact is that it gets pretty annoying later, especially if what she does often result to anyone who do so much as rub their skin against her getting the pointy end of the dagger. 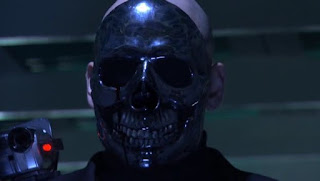 And speaking of which, perhaps the very thing that made Laid To Rest a worthy viewing would be the insanely gruesome practical effects work by Almost Human Inc., which made sure a staggering percent of the murders committed here are as insane and gorily chunky as possible, with death rattles, gross detailing and sickening editing and sounds thrown in for maximum effect. All of these are bettered by the killer introduced to commit them, a silent yet enraged Chromeskull whose origins are little, if not altogether unknown (though there are hints of his medical background as he was shown performing quick surgeries on himself), and murderous motives made extremely clear with its simplicity: to record and kill, taunting officials who've been after him for quite some time now. This lack of origin somehow effectively fits with Chromeskull's abundance of body language as he personifies a threat that is simply "there", but with a personality that's intensely and creatively unpredictable.

In the end, Laid To Rest is simply a modern popcorn B-flick, something you can pop on to poke fun at and/or cheer for the insane graphic violence it offers. It's not going to give anything more than a cool killer and his wonderfully gorific bodycount to keep its audience glued to the screen, so if you're up for a junk food slasher that's all taste but no depth, this is a perfect film for you!