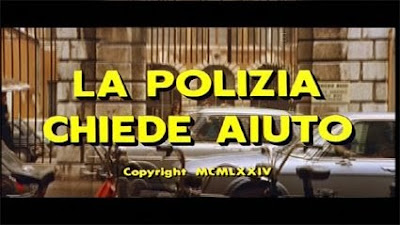 What Have They Done To Your Daughters? (LA POLIZIA CHIEDE AUITO)(Italy, 1974) (AKA "The Co-Ed Murders)
Rating:***
Starring: Giovanna Ralli, Claudio Cassinelli, Mario Adorf

As of writing this, I noticed that my blog barely (if not never) covered any giallo titles for the past few years and find this rather unacceptable and sloppy of myself since I pictured this site to review anything under the slasher family, this including slasher-friendly thrillers and Italian gialli. Well, thanks to this little film, I recently caught the "yellow" fever once again and I think it's only fair that I cover this giallo hybrid to express my gratitude for its unintentional help.

After an anonymous tip leads a squad of police to the naked hanging body of a fifteen year old girl inside an old room, police inspector Valentini and assistant public prosecutor Vittoria Stori ponder on the possibility of this being an average case of a suicidal teenager taking her own life. Things get a tad stranger, however, when autopsy reports indicate that the girl was not only pregnant, but also had some very wild trysting prior to her death. The apparent suicide soon becomes a possible murder when the girl is also later recognized as the girlfriend of a young man under police surveillance after being involved with a recent street riot. As the investigators proceed to look further into the case, more suspicious characters are introduced and a motorbike riding killer starts a bodycount with his trusted meat cleaver, bent on keeping a dark secret hidden at all cost.

As the middle entry of director Massimo Dallamano's Schoolgirls in Peril trilogy (The other two titles being What Have You Done to Solange? (1972) and Rings of Fear (1978), though Dallamano only wrote the latter as Rings wasn't filmed until after he passed away) What Have They Done To Your Daughters? sets itself apart from your traditional Italian "yellow" thriller as, though many traditional aspects of a giallo such as a sleaze and violence are clearly present in its narrative, it has a stronger focus on police procedurals and near-realistic investigations more commonly found in cop thrillers (or poliziotteschi as the Italians call them) than purely exploiting its subject matter of teenagers being slaughtered or taking part on an outlandishly hedonistic secret. Daughters, in turn, has a lot of moments in which its writing and direction has a tone of seriousness and felt very grounded, tackling not only a believable execution of a murder mystery but also a controversial political conspiracy that has a level of subtlety to it. (Read. "A" level)

Daughters is still not one to lack on some decent bodycount horror among the typical action/cop drama elements of car chases and methodic police work. Though some of the more important murders occurred offcamera, we still have a fair share of workably intense stalking sequences, disturbing imagery and a few bloody killings thrown in the midst of the investigations, working pretty well with the flow of the plot as, the more our leads get closer to finding the truth about the murders, the more visceral and active the horror elements become.

On a personal note, I love the choice of wardrobe our killer dons whenever they are on the hunt as it somewhat works in favor of the two film genres merged in Daughters: it's both a classic giallo villain garb (full black suit with leather gloves) and it's fitting for a high octane action sequence. I also love the fact that the killer was never properly seen without the get up which adds to the mysterious and secretive nature of the plot. Sadly, the only thing that kept me from loving this giallo anymore than I should was the lackluster ending; without giving away much, I felt cheated that after all of the growing build up, the plot simply decided to either snuff off or let go the guilty ones way too easy, without giving any proper closure to the mystery and the crimes committed. I understand that this might be on par to the genre deconstruction director Dallamano was aiming for, but I see very little reason not to close the entire thing with a much more satisfying and better constructed conclusion.

Nevertheless, I enjoyed What Have They Done To Your Daughters? as a workably "okay" giallo/cop thriller mash-up. Despite the lack of onscreen sleaze and gorier bloodshed, Daughters make up for these little shortcomings with an interestingly focused plot, a solid direction, developed casts and a groovy score by composer Stelvio Cipriani. May it be a giallo or a poliziotteschi, it's just the right kind of movie to get me into the Italian bodycounting mood!