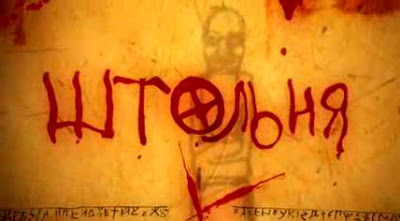 In this Ukrainian production, five students from an archaeological institute join their professor in his dig to uncover some precious artifacts left behind by a group of ancient pagan cultists. However, what these kids find instead is a locked entrance to a series of underground chambers, which may or may not be the final resting place of their aforementioned pagans, and it soon escalates to them entering it by the following morning when their professor goes missing and the chamber's entrance is now unlocked.

With hopes of finding their professor there as well as see if the old tales of hidden pagan artifacts are true, their expedition into the chambers proves to be a fatal mistake as not only do they find themselves lost in its labyrinth-esque turns, but someone appears to have taken an interest on keeping these kids from getting out alive.

I have my share of respected and loved underground survival movies like 2001's The Hole, 2006's The Descent and 2007's Catacombs, and Shtolnya actually looks like a promising foreign take on this shindig as it has the setting and some of the set-pieces workable at a point. In fact, the chambers in this movie, with its maze-like paths, rat-infested wells and dangerous debris lying around, are well comparable to what Tobe Hooper's The Funhouse did to its titular carnival attraction, making it an effective sort-of secondary villain with its trap doors, secret entrances and dangerous props. Further making the survivalist tone of the plot work were some selected scenes that grounded how dire the teens' situation had become, such as an accident ruining their makeshift map, a cellphone call wasted on a non-responsive receiver and one moment when they nearly got an outside help, most of these nearly leading to the group going at each other's throats.

I personally believe Shtolnya would have been a better movie if it focused purely on the teenager's struggle to get out alive, or at least keeping their sanity straight. They might be portraying your classic horror meat but the casts are surprisingly layered and grown to be more likeable the further the movie goes. But (surprisingly coming from me), the movie's attempt to be one-part teen slasher may have knocked it back as an entertainment piece since the slice-and-dice antics look completely forced. And the reason for this? Most of the deaths here are accidental, if not incidental, and the one kill the supposed killer did was caused, rather than personally committed. (As in they startled a victim into tripping a death trap. Not the best way to win our attention, killer) We are only made aware of this villain's presence all throughout with their nasty habit of smearing pagan symbols on the chamber walls with the blood of the dead, but this just made our antagonist look more opportunistic rather than intense like any real movie slasher should be, thus further making the "killer's" inclusion all the more pointless and odd.

This didn't stop the film from playing around with the slasher act, however, as the final third did try to feature a more hands-on take on the killer's terror and we got this supposed twist reveal to their identity. Nonetheless, their inability to really do some personal damage and with all the good bulk of the movie focusing on the survival aspect of its story seem to have watered down its impact. It's a shame, really, since the movie's claustrophobic backdrop and generous amount of darkness would have given Shtolnya a better treatment to their attempt to mix in slasher horror.

Nevertheless, Shtolnya is still a gorgeous and atmospheric offer from Ukraine that deserves a little praise for its low brow attempt to create something different for the slasher/survival subgenre. While it may need more work in merging the two film types proportionately, or at least tried harder in making its slasher portions more recognizable, it's gritty premises and challenged characters should provide enough foreign teen horror goodness to sit through and enjoy.

Bodycount:
1 male crushed by falling rocks
1 female attacked by rats, dies from shock
1 male shot with a rifle
1 male electrocuted
1 male ran through with a javelin, immolated in explosion
Total: 5
Posted by Kaijinu at 6:49 PM