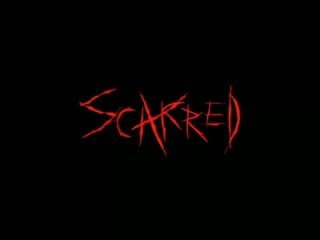 It goes without saying but I will say it anyway: some movies are obscured for a good reason.

Scarred is one of those mid-2000s no budget horror entries that tries a tad too hard to be the best in the gig and, granted the plot did sound like a fair run through familiar trappings, I honestly can say that their efforts could have been better.

The movie begins with your typical slasher trapping of a couple itching to do a sloppy make-out session. Boyfriend drank too much beer so he left his girlfriend alone in the woods to hurl, inevitably leading to her being attacked by a feral woman with a supposedly skinless face.

We then shift our focus to a family driving to a dense woodland area wherein the father hopes to make peace between his children and his new (and younger) wife. Tagging along them is the daughter's bestfriend coz trysting reasons and bodycount, and as soon as the group settles for camp, they are randomly visited by a young park ranger who is patrolling the area that night and spontaneously decided to share with the family an old local legend of a faceless woman ripping people's faces off so she could wear them.

Of course in this type of flicks, the legend turns out to be true and the same faceless woman from the opening has now targeted the family for her maniacal face obsession and soon picking them off one by one.

For its worth, there are scenes in Scarred that effectively capture the exploitative feel of the plot such as the killer's origin told via campfire tale and one scene wherein the killer forces herself unto a disabled victim while she wore his dead girlfriend's face. Gore is okay whenever it is present (pretty much just limited to flayed faces, to be frank) and the fact that the production placed a family over our standardized selection of disposable teens tells that they were attempting something a tad more tragic and irreplaceable.

It is these little dark moments that should have helped keep Scarred as sickly twisted as possible. Unfortunately, it's hardly enough to step up the movie's standards as a mediocre delivery to what we already know about the things that go stab in the night.

With a length of 76 minutes, Scarred decently paces itself for its effort to build character and some sense of dread, but with the villain revealed early in the opening and with the lead casts doing some questionable and cheesy hokums even during the times the killer made her presence known, the little attempts to be scary, intense and grim are undeniably hobbling to keep up. It wasn't long before the story starts to tick down all the known slasher cliches dos and don'ts, leading to a half-tame killing spree, a killer who's overworking her feral-ness to the point it's hilarious, even more dumb things that lead to people dying and an eventual last act that devolves to the characters screaming, clumsily surviving and (dig this) seemingly attempting to befriend the feral woman?! (Oh, you can smell the fondue all the way here!)

It's hardly a commendable title but I cannot say that I didn't enjoy my time with Scarred, nevertheless. I can tell that the film has ideas. Good ones. Just a bit restrained in the budget department and the talents involved. I wouldn't be surprised if it was these shortcomings that had this film hardly being brought up. If you do get a chance to see this, I will say it is best to keep the expectations low and prepare for a wave of Gouda. It's not good, but you could do worse.