The Six-Fingered Hand of Bloody Redemption: The Redeemer (1978) 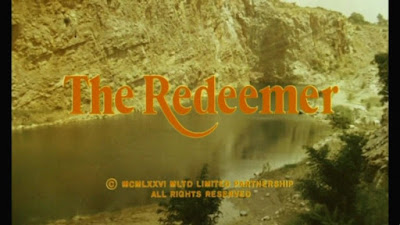 The Redeemer (1978) (AKA "The Redeemer: Son of Satan!", Class Reunion Massacre")
Rating: **1/2
Starring: Damien Knight, Jeannetta Arnette, Nick Carter
Oh, Lordy. This movie. This wonderfully horrible movie.
It starts with a shot of a hand punching out of a clear lake after a tedious run through the opening credits and a sacrilegious quote, revealing a boy with a very dated haircut casually walking out of the waters and boarding a bus headed to the town church. Elsewhere, a shadowy figure grants a sleeping fellow an extra thumb on one hand because spoiler-related reasons. And, yes, it's kinda gross-looking. One tiny thumb on top of an elongated one.
We then we see that the soaky lil' dude is one with of the (more bullied) choirboys and the sermon is your typical fire-and-brimstone type about sins and whatnot, yelled by an equally typical Bible-thumping priest. This is where we get our character introductions interjected through out the righteous Gospel ramblings; John, a lawyer who values money more than a fair trial; Cindy, a party girl with multiple failed marriages; Terry, the eater of burgers; Jane, one who shoots at pigeons for fun; Roger, a vain actor who walked out of set because someone spilled a drink on his pants; and Kristen, a lesbian. Just, uh, just a lesbian. The six happen to be part of a small clique back at their highschool years and they all recently received an invitation to attend a reunion back at their alma mater. 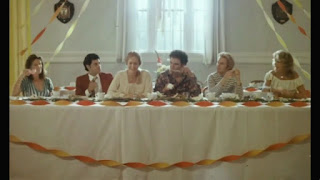 Unbeknownst to them, they're the only ones who got the invites, which could've have just been weird, amusing even, if it wasn't for the loon out stalking and prowling around the campus killing them one-by-one. A loon with a penchant for hammy disguises, life-sized weapon-wielding puppets and Biblical tirades. A loon who calls himself- The Redeemer!
Now, see, as much as I want to decimate this movie and make a mockery out of its flaws, I can't. I just simply can't. I have a soft spot for dumb cheesy movies, particularly those that are done with the right amount of unintentional humor and have made odd spectacles out of themselves, something The Redeemer here manage to do and a little more. For one, the atmosphere is just befittingly weird coming from the story's dream-like logic and semi-creepy direction, straight from the shot of a random choirboy rising out of the cold waters and the random double thumb appearing at one's hand, to the villain's unusual gimmick of donning random costumes and his somewhat supernatural nature. It plays well with the movie's good eye on expressive cinematography and, too, the villain's warped morality which can be best described as very shallow at best (or worst), yet strangely entertaining leaning on the fact he's going through all of this trouble of dropping swords and setting up blowtorch-equipped mannequins to attack just because the clique is guilty of things like eating too many fast food or loving themselves too much. That said, despite the absence of strong grue or a high count, I also came to like the murders perpetrated by our Redeemer here all for the sheer unusualness of it all, may it be the execution of the scene or the imagery itself. 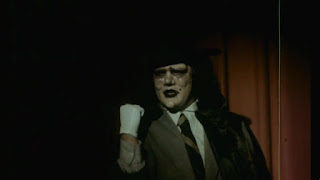 Character-wise, it's hard to hide how regular the victims can be, unfortunately; don't get me wrong, the actors tried (and I mean, tried) to milk out any seriousness and talent they can muster to act their respective one-note meat bags, but writing and scripting are hardly this movie's strong points so they go against creating any real solid casts unsurprisingly. You could say the same for our titular killer with his holier-than-thou horror trope psychosis, but he at least has the thankful joy of being exaggeratedly bad, to the point that I can't really take him seriously despite the murdering business and all. (Like how can you? This guy can't even get the number of sins right. It's seven deadly sins, shmuck. Not six. Unless we're pulling a Se7en (1995) here and the killer is the seventh sin?!)
Yes, The Redeemer (1978) is no real gem, but it's a personal treat that keeps splitting my sides with its ludicrous ham, as well as captivate me for just how absurd it can get. Perhaps you can say I find it so bad it's good, so much so that it deserves to sit proudly next to other lovable bad trashes like ThanksKilling (2008) and Nail Gun Massacre (1985). If you see yourself a wee bit curious enough to try it out then I say, go for it! Just remember to dim the lights in your noggin and not take any of it as high art as much as possible and you'll do mostly fine!
Mostly.
Bodycount:
1 male shot on the neck
1 male set on fire with a blow torch
1 female shot with a shotgun
1 male gets a sword dropped unto his head
1 female drowned in a handwashing sink
1 male shot on the head
1 female hacked to death with a sword
1 boy seen dead from throat cut
Total: 8
Posted by Kaijinu at 12:18 AM