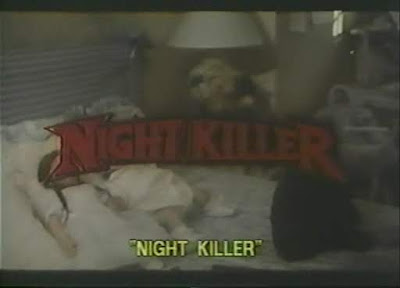 When a slasher film you're watching is only a slasher thanks to gory re-shoots insisted upon film producers who weren't happy with the director's original work (and said director is none other than Claudio Fragasso, who masterminded the infamous cult classic bad movie Troll 2 (1990)), you know a lot of things are bound to go South. Way down South.

In Virginia Beach, a maniac in a cheap Halloween mask and half a pair of long-nailed monster gloves is murdering women after assaulting them and it appears their next target is Melanie Beck (Tara Buckman), a house wife whose self-empowering mantra includes flashing her breasts out to rub them while watching herself in a mirror doing this. (No. Really.) One creepy caller is actually inside the house gag later, Melanie finds herself face to face with the disguised murderer who found a way in her house and next thing we know, she's in a hospital with a total mental block of what transpired after the creep got in and seemingly had their way with her.

This amnesia frustrates local cops who were hoping to have Melanie identify the attacker so they can finally make an arrest, but none of them are as miserable as Melanie herself, now thinking the only way out of a meaningless existence is to commit suicide by pills. In broad daylight. At a beach. Fortunately for her, a random guy spots her chug the pills and recognizing this as a suicide attempt, forces her (as in, shoves her entire head underwater) to ingests salt water so she can vomit them out, thus saving her life.

Unfortunately for Melanie, however, her would-be good Samaritan is actually a creep who has no problems locking her up in his place so he can toy around with her suicidal tendencies and fragile state while munching on french fries and KFC chicken. Could this man be the raping sicko murdering women every chance they get? Or has Melanie, in her worst luck, just jumped out of the frying pan into the fire with this one, bound to endure another psycho's wrath?

With the film's original concept as a psychological thriller, it's not hard to see that this is the film's proposed little mystery for us and, in all honesty, I could see it working on a serious (or at least somewhat serious) direction but considering this movie's writing and acting being so sporadic, sleazy and off the wall, I'm not surprised to see it cheesed up like the insides of a pizza crust, so much so that it's phenomenal and the fact that this movie had not imploded into a completely unwatchable rancid curdled mess is just mind-boggling at best.

In a sense, Night Killer (1990) is a popcorn movie meant to be riffed for how hilariously bad it is from the cheap and obvious Freddy Krueger cash-in to thespian talents that is limited to overacting or underacting. (notice the lack of "from" and "to" ?) It doesn't look like its striving to be a competent horror film with a high and creative kill count or scares aimed at the two living brain cells in our noggins that's overworking themselves to make something coherent out of this movie with how much exposition, twists and psycho-babble it cobbled altogether, but what it lacks is made up for the amount of zany energy, laughable set-pieces and the undoubted hammy tone that's just too out there to completely hate. (The key word is "completely")

It's certainly not a movie meant for those looking for a traditional thriller, but lovers of bad cinema, of the so-bad-its-good brand, would see Night Killer (1990) as a strong recommendation that goes so well with a cold six pack of beer and half a brain that's just looking for something to cackle at.