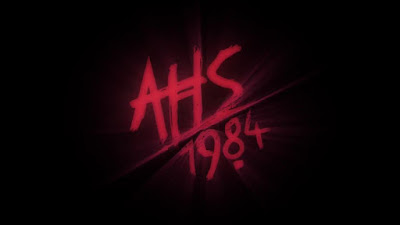 American Horror Story is a horror anthology series that had my attention for only one season then, which was their 1950s set fourth renewal Freak Show, undoubtedly their best season which caters a period dramas filled with a very colorful cast of men, monsters and everything in between. Didn't bother much with the rest as I hardly find anything to invest on politically-themed cults or school girl witch covens, but now that AHS returns for a ninth season and is getting well oriented with the hack-and-stab subgenre of 80s slashers, I say why the hell not?

In 1984, good girl Brooke Thompson finds herself targeted by the infamous serial killer known as the Night Stalker after finding him inside her home. After surviving his attack, she decides to leave town with her new friends from a dance aerobics class and drive up to Camp Redwood where they'll be working as counselors as a mean to both take her mind off the home invasion and for her own safety. Unbeknownst to her, Camp Redwood has a grim history back at 1970, when the camp's groundskeeper Benjamin Richter, AKA "Mr. Jingles" due to the jingle of keys he carries, went off the deep end and massacred a number of victims before getting apprehended and chucked into a psychiatric clinic.

It seems history will repeat itself tenfold later that night as not only has Mr. Jingles escaped captivity and made his way back to the camp to start another killing spree, but the Night Stalker somehow legged it all the way to the same woods to find Brooke and some of her friends and co-workers aren't as innocent as she hoped they'll be.

As a slasher series, American Horror Story: 1984 (2019) played enough cards right to be a flawed-yet-entertaining tribute to late 80s backwoods stab-a-thon that kept the series' signature style of story telling. Oozing with neon bright light and stylized synthetic music, with top-tier production and some wonderful talent up front and behind the camera, the story suggests something hip, hammy and crawling with cliches until it starts defying traits between heroes and villains, putting us through a deconstructive and reconstructive stroll down slasher tropes.

For the first five episodes, AHS 1984 is something of a cross between a Friday the 13th sequel and Mario Bava's A Bay of Blood (1971); we got not one, but two slashers stalking and killing folks all over in your typical backwoods horror swag, while the show's signature flashbacks and twists reveal that our casts are hiding dark secrets of their own and some of them are bound to go cuckoo with a knife at the drop of a hat, given that they haven't already. It's probably the best slice of the season and where the slasher influence stands strong, with heavy gore, two killers duking it out ala Freddy vs Jason (2006) with an unexpected turn and a lot of fine curve balls on the plot that somehow works and fits perfectly to the flow of the story, keeping me glued and pondering where the night will lead to.

By the time episode six rolls in, things shift into a more revenge-driven plot as it time-jumps a couple of years, now following a plan to open Camp Redwood once more as a concert venue under the guidance and selfish gains of the season's revealed big bad. This turn promised some great ideas like a converted villain living a quite life being forced to wield the machete again in order to protect a loved one and a couple of prisoned characters escaping to get even to those that landed them there. Heck, there's even a concert-wide massacre in talk among the characters which would have been pretty epic for a TV series, but AHS 1984 have other plans.

Personally, the last few episode is where the season derailed itself a bit with its load of dumb character moments, plot holes and wasted opportunities. It leaves us questions that remained unanswered despite teasing us an explanation, a few bland characters getting added in for no solid purpose apart from kicking up the kill count, and that one massacre these last episodes are building up to failing to deliver because, well, they literally didn't deliver under the reason that the characters simply changed their minds. It's somewhat disappointing for those looking for a gore-out death porn-style finale, but I can't really say that much ill to this as it still does have the cheesy and sometimes funny charms one can hope for from a real slasher story (Like how certain non-ghost characters appear to not have aged at all after a certain time-skip, or Kajagoogoo getting slaughtered), with some deep thoughts regarding labeling, revenge and trauma amidst the blood-soaked bodies and meat-tainted blades.

This all leads to a season finale that's as bittersweet wholesome as it is bonkers, with ridiculous end games for a notorious killer and a real bitch that did got me chuckling for how highly cathartic it is, as well as for the amount of onscreen brutality conflicted upon the two villains. Follow that with the tear-jerking ballad of Mike and The Mechanics and a powerful message of happiness and comfort after all the doom and gloom, we're pretty much set to experience this series' more demented yet arguably fun and lukewarm season.

In the end, American Horror Story 1984 is one busy series for cramming all of the tropes we know and love/hate about slasher movies into a mostly alright TV drama despite the schizophrenic time-jumps and inconsistent lore. It's hardly as big and grand as the aforementioned Freak Show, but it runs the show with much gusto, passion and bloodlust. (Oh, the bloodlust.) that it's not hard to find something to at least like about this show's more bodycount-friendly ninth renewal.