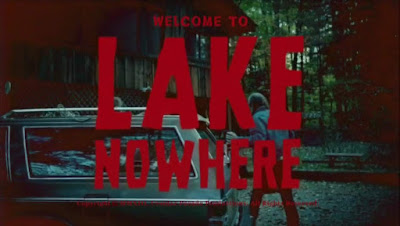 This is what would happen should Evil Dead (1981) and Friday The 13th (1980) had a happy, stabby mongoloid baby raised within the era of Video Nasties and Grindhouse exploitations.

A fun throwback to old school backwoods slashers with a mysterious supernatural twist, Lake Nowhere (2014) starts with a trio of faux commercials, one being a beer ad which I am sure is funded in secret by werewolves (or hardcore furries, whichever one offends you more) and the two others being cheesy trailers for what appears to be a Satanic Cult/Giallo hybrid and a scifi creature feature involving giant killer plants and a mutated farmer. (Would pay good money to see at least one of these turned into a real film!)

The main plot then follows your classic gaggle of party-hungry teenagers getting away from it all at a cabin deep in the woods. One of them decided to stroll around the woods with her adorable dog, soon stumbling upon an old tombstone with a cryptic prayer carved into it. Unknown to her, the prayer, when read aloud, seemingly unleashes something dark, ancient and feral into the forest which may or may not be associated with the masked maniac that's been lurking around and spying on them the moment they step foot into the woods.

Done in a fittingly speedy pace with the same contrasted tone and rough texture of a forgotten low-budget vintage horror number, Lake Nowhere (2014) is an impressive love letter that kept much of the simplistic hammy fun of your usual slasher-in-the-woods affair, all the while working in a supernatural angle that soon introduces a surprise threat that eventually trails the story into an artsy finale that boasts quite the haunting atmosphere and imagery. It is gritty and raw when the time calls for it, more or less rewarding patient viewers a second half that packs nifty practical gore effects and a killer whose intimidating presence, design and motive remain apt to the movie's mysterious tone, a feat that I find quite grand for a film that runs in a short 51 minutes. 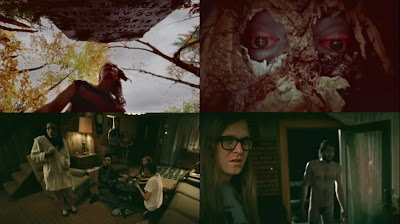 The actors also did well enough on their roles, playing out their parts as natural as possible to give their rather two-dimensional characters some level of being relatable. The only real drawback I see here is the lack of details as to what exactly their characters are dealing with as, while it is strongly suggested that there is something supernatural about the killer, the film didn't dwell any further into the nature of the otherworldly threat and how it relates to not only the masked murderer, but also to one of the characters. This leaves a lot of questions unanswered, but thankfully there's a strong Fulci-inspired nightmare logic at play once the movie's direction turns for the bloody and horrifying, giving us a chaotic fever dream of a killing spree and an expressively eerie last act to make up for the loose ends.

Sometimes cheesy and messily gory, Lake Nowhere (2014) is late night VHS weekend entertainment nostalgia in a short yet horrifyingly eventful running time. Flawed and unoriginal it may be plot-wise, there's no doubt of it's an amusing retrospect to old school dead teenager films, greatly earning its place as a praiseworthy horror effort with a lot of heart and passion behind it. What else is there to say but grab a copy!