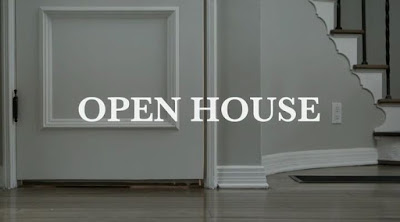 Not to be confused with the cheese-tastic 1987 bodycounter of the same name or the 2018 snowbound thriller, this Open House has two well-dressed psychopaths, Lila (Tricia Helfer) and David (David Geraghty), breaking into a house that was for sale by its recently divorced couple, Alice (Rachel Blanchard) and Josh (Stephen Moyer). After sedating Alice in the cellar and murdering Josh, the two maniacs takes over the home and pose as its new tenants, leading a lot of random folks in the neighborhood into a guaranteed death trap as it appears Lila and  David have a thing for killing people.

Why the killings? Not a damn clue, but one of the killers did mentioned something about two children living in the forest getting tricked by a creature into leaving their homes only to get lost and alone, clinging on to each other but cannot fall in love because actually twins.

Open House (2010) admittedly has some intriguing bits, more of it around the dynamics between the home invaders, but it gets pretty tiresome once the half mark hits and we get little to no further built-up as to what these killers want. All we get is that Lila wears the metaphorical pants between the two (not literal ones. She likes to show some legs) as David is mostly bossed around whenever he's not keeping to himself or knifing a few other people that happens to be in the way. His only act of defiance, and probably what kept this movie from being unwatchable, is keeping Alice drugged and alive, letting her out from the basement cubbyhole during the day while Lila is out and about so he can spend some time with her.

Apart from these slices of good elements, the rest of Open House (2010) is as bland and boring as a watching paint dry on an old house: you wanted to be excited because it looks good, but the crumbling estate makes you think if its even worth the hassle. That's more or less what I feel about this movie as there's nothing scary to speak here, any suspenseful scenes is predictable at its worst, and there's hardly anything creative in its kill count. Dare I say then, why bother? Precisely. The film couldn't even find an exciting ending for all the boresome bull honky we have to sit through.