Welp, it's October 31st here in the Philippines! That means absolutely nothing unless you're age 10 and below which, in that case, would mean afternoon Trick'r treating and a week off school.

For me though, IT'S HALLOWEEN!
And as someone who's practically an adult living in a country that doesn't recognize Halloween as a holiday, I mostly celebrate this by making blood pacts with Lovecraftian gods watching spooky movies from years old and new! So today, I decided to share with you my picks for my annual Halloween viewing! From a back-to-back Holiday slashers to a cavalcade of carnage clowns, let's begin my picks with:

Hell Fest (2018) and Haunt (2019) - Preferably seen back to back, these two back-to-basics slashers follow anxious final girls and their friends venturing off to Halloween events only to meet foul ends at the hands of some very whacked-out psychos. Both films have their share of gore and scares, but what sets them aside from one another is their atmosphere; while Haunt seems to be going for a more grungy and claustrophobic tone with its titular haunt and ghoulish proprietors looking so clunky and cheap (with a good reason), Hell Fest has this Hitchcockian feel to it as it relies on stalking scares whenever it ain't goring it up the vast, open spaced Hell Fest that is the unknowing stalking ground of a random maniac. Whichever you want to start with depends on your mood! 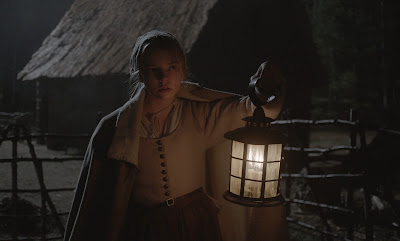 The Witch (2016) - Looking past the Ye Olde English scripting, this supernatural "New England Folktale" is strong on the brooding department and nightmare imagery as a 1630s farming family gets terrorized by a plague of disappearances, hexes and death, seemingly perpetrated by a witch in the woods. Very atmospheric, gloomed to the grinded baby bones and downright fuckin' creepy. 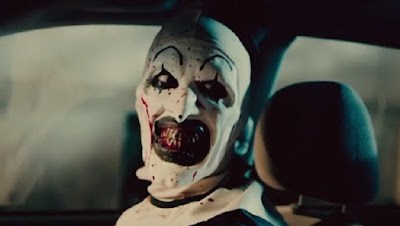 Terrifier (2017) - A notoriously brutal slasher flick that'll give them coulrophobics and casuals alike a bad taste in their mouths, while rewarding us gorehounds a simple yet satisfying bodycounter as we follow Art, a demonic mime with a penchant for hunting two teenage girls at Halloween night and slaying whoever happens to be in the way just for the laughs. Make sure you're not squeamish! 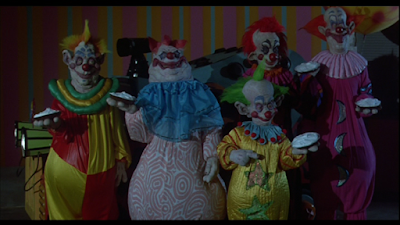 Killer Klowns from Outer Space (1988) - From one killer clown to another, though this one's cheesy affair would come as a welcome mental palette cleanser for those who're probably got fucked up by Art's ole' antics above. (Or not, depends on your ground, I guess) As a sort-of parody of The Blob, a spaceship full of clown-themed aliens arrives on Earth and wrecks havoc on a nearby small town, killing people left and right with cotton candy guns, popcorn monsters and man-eating shadow puppets. Who can stop these creatures? Why a couple of teens, of course! 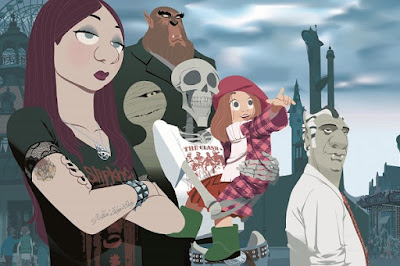 Zombillenium (2017) - An animated flick based on a French comic book series, following a human health and safety inspector unwillingly becoming a part of a horror-themed amusement park he was assigned to, where real monsters reside in plain sight, after dying and returning as a demon. He now must find a way to escape the park to reunite with his daughter, but with his new monstrous form, how can he? A bit cheesy on the plot, but it has a lovely art and adorable characters (some of which has bouncy monster boobs. hurm), plus the animation is just beautiful at times!

Dave Made a Maze (2017) - A bit of a wild card, this surreal fantasy flick may not be overall horrific, but it does feature enough Minotaur monster action, nightmare situations and paper "blood". Thanks to "reasons", a normal dude with self-esteem problems named Dave somehow made a working maze (well, more like a labyrinth) out of nothing but cardboard, tape and probably other things lying around in his apartment. On the outside, the maze look more like a cardboard castle, but once Dave's girlfriend, friends and other random folk decided to step in to find him as he claims to be stuck, they're in for a huge surprise! Weird as hell, but it has that underlying warmth to its story. And then some. 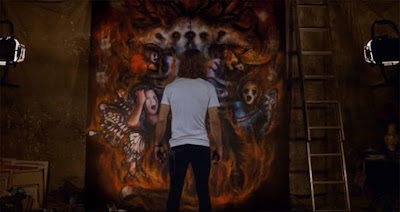 The Devil's Candy (2015) - What's a Halloween without a little heavy metal and murder? This cult classic has a struggling painter and heavy metal enthusiast Jesse moving to a rural farmhouse with his family, not knowing about the apparent demonic forces residing in it and a dark history that's about to repeat itself. Demon worship, rock and roll, and gory kills, what more can you ask for? 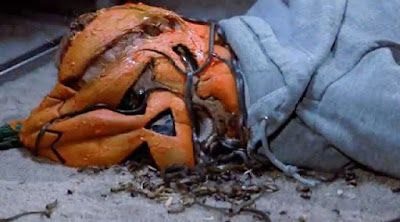 Halloween III: Season of The  Witch (1982) - The runt of the Halloween franchise litter that most of us owe an apology to, this genuine cult favorite stood its ground as one of the more unique Halloween horror films out there for its outrageous concept of evil druids working as business men, plotting a mass genocide of children through cursed Halloween masks, a bit of science and an annoying TV commercial and jingle. And with Tom Atkins in the leading role, why the hell not?

Halloween (1978) and Halloween (2018) - And, of course, why not the classic? But wait! Why watch the classic alone when you can do it back to back with last year's welcome contender, Halloween (2018) ?! Watching the night he came home all the way to the night he came home again back-to-back is one of the finest Halloween treat one can indulge in thanks to just how good and fitting the sequel is, exploring post-trauma stress and its effect with everyone involves while still keeping the bodycount scoreboard high in the digits. Start off slow and steady with the original, before ending it swift, cunning and bloody with the modern sequel, can't go wrong there!

~~~
And there you have my list of watchables this year! Something creepy and kooky, mysterious and spooky. And now, if you would excuse me, I gotta go be ooky. Stay safe now and have a...