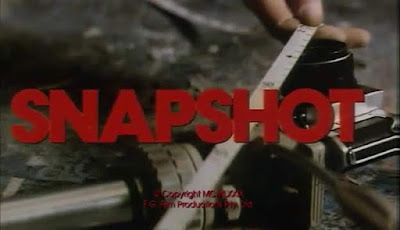 In a probable attempt to cash in the stalker-stabber hype started by John Carpenter's Halloween (1978), this Ozploitation gets retitled as Day After Halloween during its American theater release and then The Night After Halloween for its video US release, even though the film itself have nothing to do with the Carpenter slasher classic, nor does it even take place in November 1st. Nope, what we have here is a thriller. A drama thriller. About fashion modeling and the grim exploits one can find themselves spiraling into with the profession, executed in grand Gouda with high brow acting and disco tunes.

In short, a dated feature length TV soap with nudity. 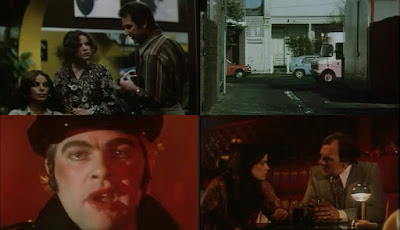 The story revolves around Angela (Sigrid Thornton), a meek hairdresser who finds herself unsatisfied with her working and living conditions, coaxed into doing fashion modeling by her (apparently famous) glamour friend Madalyn (Chantal Contouri). Though hesitant at first knowing how strict her mother is, Angela eventually gave in to the idea and starts doing nude photos for Madalyn's photographer friend who's handling a "Bermuda Cool" cologne ad campaign. Things go somewhat okay-ish for Angela until, after a couple more modeling gigs, she gets conned into doing shadier photo sessions, particularly the sleazy kind, and everything goes downhill here.

In addition to this, there's also a subplot of Angela's ex-boyfriend going stalker on her, mostly implied through a looming ice cream truck that keeps following her and her friend, as well as indications of break-ins that have Angela's clothes ripped or her finding butcher shop pig heads on her bed. (Eat yer heart out, Jack Woltz. Or, maybe not. At least your horse head had blood in it...) I guess this the "horror" part that this movie tries to market as a "conspiracy of terror" but, truth be told, its hardly exciting and the end result is pretty laughable by all standards pertaining to thriller cinema as the stalker is just a cringy whiner and there's minuscule blood shed because killcount? What killcount? 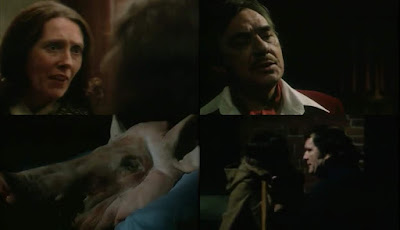 If you're in it for the cheese then you're in luck because Snapshot (1979) has the hammiest lines and soundtrack lyrics, the latter even includes a theme for Angela herself, done with a subtlety rivaling Narcissus's ego. I'm absolutely sure this didn't help sell this movie among horror enthusiasts but it may have been worth a chuckle or two for those genre film fans hunting down a bad movie to poke fun at. Aside from that, this Ozploitation cheapie is a lost cause and it ain't worth a fright junkie's attention given its slow pacing, lack of likable characters, overblown fondue fountain and, oh right, the story being really nothing more than a rising model's sudden fall into sleaze, drugs and booze which you may or may not have missed at this point. There are a few good hits of interesting set-pieces and notes that did help me stay patient with this film but the overall dramatics is an overwhelmingly drag so I ain't too please with this as an entertainment piece. Not one bit.

So, a "Halloween slasher" Snapshot (1979) is not, but a boring movie about a stupid little stick figure with poofy lips who has the worst of luck of being taken advantage by multiple sleaze bags and a fucking ice cream truck. Horror!

Bodycount:
1 male set ablaze
1 male crushed against a wall with an ice cream truck
Total: 2
Posted by Kaijinu at 2:12 PM