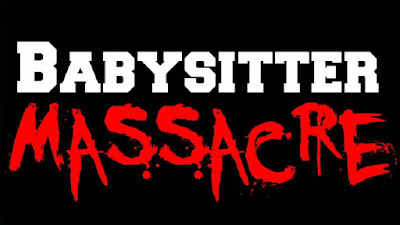 Not wanting anymore bad blood among friends before they all ship out for college, Angela plans one last Halloween slumber party with her former babysitter club gal pals, the first they will have after an incident one Halloween night seven years ago that ended with one of them abducted and now considered deceased in absentia. Unbeknownst to them, the masked figure responsible for the kidnapping returns to finish what they started, taking their sweet time depopulating the neighborhood of one teenager at a time.

Feeling a whole lot like a throwback to late 80s do-it-yourself horror films, Babysitter Massacre (2013) introduces thin plot, heavy boobs and cheap gore through a production value of a couple of hundred thousand Dollars that undoubtedly shows and fails to be that entertaining.

In writing, Babysitter Massacre (2013)'s everything basic teen drama quirked up with that old "broken friendships being mended" party trick that tries its hardest to be significant and, truth be told, that dead horse of a plot line could not and will not save this film; while slashers aren't usually known for grandeur plotting, a lot of the good ones at least have a sense of direction and consistency within its character interactions, whilst Massacre here just resorted to filling in the gaps with countless annoying conversations and girly gossip that either goes nowhere or in circles, lacking no chemistry within its self-absorbed overacted girls.

Now, that's only half of the plot. The other half is where the slasher jig gets danced with two left feet, doubling down on gratuitous and voyeuristic T&A but lacking any memorable kill scenes due to majority of it taking place offcamera and those that does appear on screen are fast-cut edited and acted so cheaply, it's just embarrassing to watch as it led so much of the action a lot to be desired. Like no one would moan as if they're experiencing La petite mort while their fingernails are getting ripped off! Underplayed much? Surely, but the bad news crew doesn't stop there once we get a look at the killer's get up: a white featureless cloth mask that covers his entire head and a black jumper suit. I mean, yeah, it would look creepy in writing and probably in concept, but the way the film's shot, so crisp yet lackluster, the killer just looks awkward and ridiculous, with me half expecting them to trip unto something or start breathing frantically as they realize there are no holes on the damn thing over their head. Blood and Black Lace (1964) made it work because it is artsy, Babysitter Massacre (2013) couldn't since it's just trashy. And boring. And obviously cheap.

I guess if you can take anything from this movie, Babysitter Massacre (2013) can be hoot to poke fun at. After all, the ham it packs stinks up the whole movie to the point that it is so laughably bad, if you would look at it as a Z-grade shlock that deserves to be ripped apart for how inept it is, you'll certainly have a good time doing that and wouldn't feel bad about it. Plus, boobs. And butts. In and out of lingerie. Some people would approve, others wouldn't, all-in-all cheap exploit.

This is a hard pass. There are good do-it-yourself horror flicks out there and this movie ain't one of them. Not even close.