The Princess And The Psycho: BodyCount (1988) 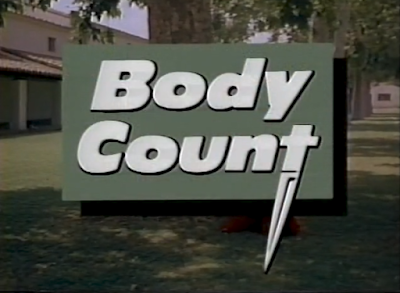 When a slasher fan brings up the title "Bodycount" around other hack'n slash enthusiasts, a likely bet is that everyone will think of the Ruggero Deodato's 1986 (or 1987?) cult backwoods classic about a knife-wielding "Old Indian Shaman" killing teens in your classic Friday The 13th fashion. But did you know there is another slasher titled BodyCount directed by Paul Leder, who also directed other obscure slashers like Vultures (1984) and The Babydoll Murders (1993) but best remembered for the exploitative proto-slasher I Dismember Mama (1972)? I didn't too until reading about it a few years earlier and it took me some time (and countless false alarms) to finally see a copy. After watching this obscurity though, I kinda understand the movie's rarity.

Instead of going with easy route of throwing random victims someplace isolated to be hacked to death by some guy who kills people (y'know, like majority of slashers in existence), BodyCount tries to build a plot focusing on Robert, a Bible verse-spewing nutcase who appears to have a deep hatred for his rich uncle Charles, who he deems guilty of murdering his father, raping his mother and throwing him into the asylum, all just to gain their wealth. On the other side of the coin, he also has an unfathomable love for his 9-year old cousin Deborah, who he sees as innocent and pure, deserving of nothing more than all things good and untainted by his uncle's greed.

Committed inside an asylum, Robert's treatment there involves being drugged and electrocuted with an electroshock machine in hopes of either convincing him his uncle's innocent or put him in a vegetative state. But one night, Robert got lucky when the orderly supposed to be watching him got drunk and falls asleep, allowing him to sneakily grab the keys to freedom, get his trusted Bible back and scalpel a bullying nurse to death. The nurse, though, happens to be a paid acquaintance of Charles and when word of her death and Rob's escape make it to the man, he's quick to send out a troubled alcoholic detective to put an end to his nephew's life, not just for the sake of the people he might kill but also for himself as it appears there might be some truth behind Robert's accusations.

Charles' troubles, however, might get more cluttered when Robert somehow convinced his cousin Deborah to join him on a mini road trip around town for what could be his final moments with the only relative alive that he cares for sincerely. Deborah's mother has also started conniving with her lawyer friend for ways to get richer and said ways may have something to do with taking advantage of Robert's escape and killing spree, leading to the titular bodycount where anybody can be a victim.

Tangled between being inspired and cheesy, BodyCount caught my attention on how much it didn't (and I mean didn't) shy away from developing its main leads, letting us watch and know well enough that our killer is not entirely evil and that with all the undesirables he murdered and his Bible-thumping borderlines, if not already crossed zealous proportions, he's simply doing this for what he believe is the greater good for his (mostly naive) cousin. A well directed and acted production with a focused characterization such as this could have resulted to a movie that's wonderfully emotional as it is horrifying, much like the case of the splatter gem Maniac (1980) or the underrated drama slasher Some Guy Who Kills People (2011), but BodyCount was so saccharine and pious in its approach to humanize the psycho that it's comical, leaning dangerously on being a parody and barely subtle since almost all other characters that aren't our leads are made to look like low lives, making it easy to manipulate Robert into this hammy antihero with a heart and a switchblade.

For some, this approach can be a test of one's patience as they will sit through mountains of cheesy script, eye-rolling bad acting and an uninspired set of murders which consists mostly of knife stabbings to the gut. Others (such as myself) can look at all of these as the film's little own cheddar scented tongue-in-cheek charm however, meant to be laughed at in a B-grade so-bad-it's-funny manner, particularly around the parts our beloved Christian psycho goes pastor on his cousin expecting her to fully grasp his ramblings. Frankly, I appreciate the movie for the little laughs it gave me, intentional or not, and the effort its production did into making BodyCount something more than a standardized slasher, especially when the story's intriguing enough to warrant my attention until the end. Granted the subplot of people going murder-happy on everyone for an inheritance isn't new (please redirect your attention to the proto-slasher/giallo A Bay of Blood (1971)), but at least this movie made it watchable for what it is.

Does it deserve its obscurity? Honestly, it kinda does. As a slasher/thriller hybrid, BodyCount is lacking enough decent scares and gooey blood to satisfy most horror fans, but for hardcore slasher enthusiasts and completists out there, especially those with an affinity for bad cheese and weirdly nice villains, this one's a fair hunt to track down and see. At least once.