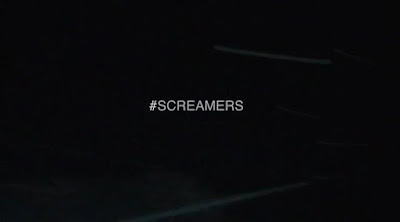 Let me get this out: I have a love-hate relationship with jump scare tactics.

If done right, the gimmick can be a fun way to get my heart pumping and send me into giggle land, but overuse and/or badly timed jumpers can get really annoying and lower the standards of whatever horror-themed genre using it. For a while, #Screamers seems to understand this but all good things can't last...

Shot in a mockumentary/found footage fashion, the movie centers on the entrepreneurs and staff behind an internet media company called Gigaler.com as they try to contact an anonymous poster who shared a popular viral "screamer video" at their site in order to strike a deal with them. The problem with this, however, is that the poster appears to be connected to a girl who have been missing for two years, prompting our main crew to track them down and investigate in hopes of making a name for their site. That is, of course, if they all will make it out alive...

With a running time of approximately 80 minutes, #Screamers mostly filled this space with a tech-oriented mystery surrounding the strange nature of an equally strange viral video, as well as lengthy expositions about why Gigaler is so innovative and daring for a website company and the drama that goes behind the computer screen which I guess was supposed to build character. It's a move that I can learn to like or at least be patient with given that the payoff at the end will be worth the trouble and the walk down to said payoff is interesting to say the least. I admit in this case that the early banters between the staffs and their bosses were some of the funnest aspects of the movie and the titular screamer videos were decently fun for a quick jump scare. Still, one can only go so long without seeing good horror in a horror film and this is where #Screamers failed.

After so much drama and intrigue shoved down our throats for the first quarter or so, you expect #Screamer will finally pick itself up and lead us down the path of workable thrills and bloody spills like any good slow burn horror movie. And, to be fair, it did exactly that at the last 20 minutes or less, but the problem here is that the plot still tries to tediously build some more tension and possible red herrings within this short span. Whether this is to unnecessarily fatten up an already cluttered story or not, all I know is that it turned the movie's slowburn direction from engrossing to downright annoying, further shooting itself in the foot when the resulting horror scenes end up feeling rushed, dull and kinda annoying.

That creepy grinning figure that is this movie's villain? Barely lives up to its unnerving look; apart from possibly being named "Francis" (Not that it's a terrible name. Just a terrible name for a villain, even after that little red herring they threw in about Francis Tumblethy, a Jack The Ripper suspect. Now I know why a certain Deadpool (2016) bad guy preferred to be called "Ajax"...), the killer "murders" his victims strangely and annoyingly by simply lunging/charging at them, shrieking his "screamer video" scream and "offscreening" them into nothingness one by one. It does this for the last few minutes of the film, jump scaring almost everyone to an off-camera death before giving us one last heartstopper that we more or less saw coming. Let how lazy that finale sounds sink in for a moment...

I was really hoping this movie would do okay just for the premise itself, but apart from an kinda inspired backdrop behind the found footage horror format and hints that "Francis" is supernatural, #Screamers misses its goal as an entertainment piece was too far out of line thanks to its desperate attempt to do something different. I admire the effort, but if the motive behind said effort was either lost or barely reached, what exactly was the point of all of this? I suggest skipping this unless you really wanna subject yourself to a mystery with a lackluster outcome.