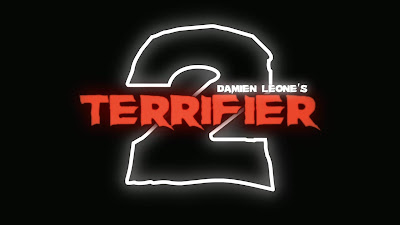 Terrifier 2 (2022)
Rating: ***1/2
Starring: Lauren LaVera, David Howard Thornton and Jenna Kanell
If you've been following all of director Damien Leone's filmography, then you'll know that whenever a certain pointy-nosed mime who goes by "Art The Clown" appears, it's bound to be a splatterpunk's wet dream at its most nihilistic and sadistic. And so on that note, here we are back for round two of Art's own picture deal wherein he terrorizes yet another Halloween night, leaving mutilations, gore-filled torture and traumatic deaths wherever he walks.

Picking off a year after the events of the first film, wherein Art stalked, brutalized and massacred a number of people at Miles County, it's Halloween once again and the town simply wanted to move past that horrific night, despite the lingering question as to whether the face-painted maniac is really dead or not since his body disappeared right after it got carted to a local morgue and the coroner attending the supposed stiff ended up as a corpse himself. With this, Art has become the local boogeyman but, unfortunately for the timid town of Miles County, he is very much alive and kicking through supernatural means and he's going to further cement his reputation as the stuff of nightmares as he prepares for another night of senseless murders and bloody bodycount, tagging along a mysterious creepy pale clown girl who is seemingly visible only to a few and acts as his little partner-in-crime.
Elsewhere, artistic teenager Sienna Shaw and her geeky, horror-loving younger brother Jonathan are still dealing with the loss of their father who offed himself some time ago. It appears the two have found themselves under Art's radar somehow, with Sienna encountering him in a dream in which he slays the cast and crew of a nonsensical show (with an earworm-inducing theme song) before setting everything on fire, an attack that somehow also sets Sienna's costume ablaze and nearly burning down the house. Jonathan, in turn, spots him at School playing with a dead possum, a sick act that got the boy suspended after he's mistaken to be the one responsible for the mess. As the Shaw household gets rockier with all the unnerving mishaps piling up, the closer Art draws near on getting his hands on these two, but not before ending a few of the siblings' friends, family and random bystanders left and right in the most brutally grotesque ways.

With an outrageous running time of two hours and eighteen minutes (?!), Terrifier 2 (2022) aims to upstage its predecessor by any means possible and it succeeds at this to a degree in terms of plotting and brutality; while the original Terrifier (2017) is basically just our crazed clown stalking and killing people from point A to point B in a it-goes-wherever-it-goes-flow, the sequel does take it time to focus on its protagonists and build the plot around them and their hinted connection to Art and his new ghoulish little girl cohort. It works in a way that the Shaw siblings are written realistically and acted magnificently by Lauren LaVera and young Elliott Fullam, though the execution of the potential lore behind who or what Art The Clown might be, as well as his ties to the Shaws might divide some folks and their need to satisfy a budding curiosity. It's already a given matter that something supernatural is at foot the moment Art survived shooting his own head and then walking it off to kill more people at the same night, but the way this is further implemented into the film can feel a little clumsy, adding in more bits and pieces that doesn't really go anywhere except making the movie unnecessarily confusing and long.
For one, it's suggested here that the Shaw patriarch have some sort of link to the clown's massacres as news clippings and sketches of familiar murders were seen inside his sketchbook, implementing that his mental decline and eventual suicide could have been more than just a mere case of depression. This, sadly, was never uttered again nor any no solid conclusion was even given, but this is chicken feed compared to the Deux Ex Machina moment wherein, without spoiling much, a weapon suddenly gains the ability to revive and heal just because it was proposed to be significant earlier on. Where and how did this even happened? Don't bother. It was in a dead man's sketchbook so I guess we're supposed to roll with it.

Bloated and patchy story aside, you can at least safely bet that Terrifier 2 is still a brutal film to sit through when it comes to its kills, probably even more as it delves quite close into torture porn territory; rather than giving us quick-cut yet gory slayings and maybe one or two extreme murders to be imprinted into our inner gorehound, this sequel opted to prolong the suffering and gruesome display as Art (still the amazing David Howard Thornton) brutalizes his victims either to death or after, all the while still being horridly playful in his body language, to the point that it's effectively unnerving. One horrifying visage, for example, have an unfortunate gal getting savaged with surgical scissors and scalpel, her scalp and limbs torn off before being tortured with salt and bleach, all for it to end with her mother finding a nightmarish scene that even I didn't expect. Corpses get fed with mashed potatoes in front of loved ones, heads are used as candy bowls for Trick or Treating, chests were pried to get a beating heart to munch on, yes, Terrifier 2 outdid itself in intense gore and traumatic horror. It's bound to upset a lot of stomachs, though probably at the cost of padding the running time a little more than needed.
To be frank, however, it is around the last thirty minutes that the film really started to fizzle dry as, again, for a film clocking two and a quarter hours, we're practically treated with an overly long climax where we simply watch a cycle of stalking, stabbing, fighting and fake-out deaths between Sienna and Art. It became repetitive and drawn out at this point, with hardly to no surprises to reward our patience apart from more weird nightmare logic, macabre visions and a random power-up, all topped with an expected sequel bait that's as grisly and messy as it is peculiar and darkly hilarious. It is here were we can certainly tell the movie as a whole could have benefitted with a trim or two behind the editing room, giving us more of an engaging narrative than the resulting product here.

I can unquestionably respect the strive done to give something bigger, badder and better for the Terrifier franchise, but sometimes it is best to keep things simple, if not humble. If you can look past its the downcast aim for a story and overindulgent last act, Terrifier 2 is just as entertainingly savage as the first film and (patient) fans of extreme horror, grindhouse splatter and B-grade slashers can definitely get a kick out of the paramount of a massacre that is this movie!
Bodycount:
1 male gets a broken mop handle through the head offscreen
8 males and 6 female shot dead with a tommy gun (dream)
1 male set ablaze with a blowtorch (dream)
1 female seen with a wounded hand, killed (dream)
1 male seen on fire (dream)
1 boy found dead from tainted cereal (dream)
1 male hacked on the head with a cleaver, decapitated
1 female scalped and slaughtered to death with surgical scissors and a scalpel
1 female seen decapitated
1 female had her head blown off with a shotgun
1 male repeatedly knifed on the groin, castrated
1 female pulverized with a blade-studded table leg
Total: 25*
(*I did not count the coroner's death as I already counted it back at my Terrifer (2017) review. As much as I want to detail here how the poor shmuck died, I don't want to be redundant just for the sake of good gore.)
Posted by Kaijinu at 5:57 AM