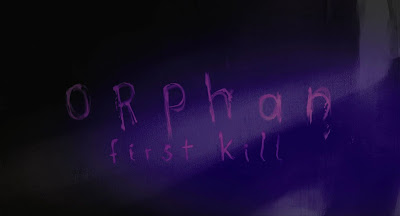 Orphan: First Kill (2022)
Rating: ***
Starring: Isabelle Fuhrman, Julia Stiles and Rossif Sutherland
While not entirely a mainstream classic, 2009's Orphan set itself to be a fun and memorable take on the killer kid subgenre that mostly played by the rules and acted out established tropes, all the while also toying with them until its rather unforeseen twist that earned this movie's cult fave status among fans. Now, we see ourselves going back for another round of terror tyke horrors and thrills as Orphan: First Kill (2022) explores what went on two years prior to the events of the first film, which turns out to be quite a deranged ride when it turns out our titular murderous orphan isn't the only monster out there.
Set in 2007, we follow Leena Klammer (Isabelle Fuhrman), a disturbed but manipulative adult woman afflicted with a rare hormonal disorder that have her appearing as a nine year old child, orchestrate her escape from an Estonian psychiatric institute by murdering anybody that got in her way. She soon arrives in American soil by posing as a girl named Esther Albright, who have been missing since 2003, charmingly ingratiating herself into the child's wealthy Connecticut family after they were notified of her reappearance. 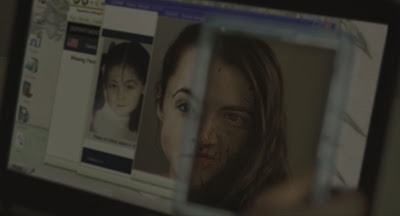 Philanthropist wife Tricia, however, immediately doubts the possibility of this girl being her long lost daughter due to Esther's noticeably new European accent and the fact that the child can't remember important details from her life before she went missing. Inspector Donnan, the detective who investigated Esther's disappearance, also suspects something off with this whole picture and starts looking into the case again. As these little inconveniences pile up into a jeopardizing situation for her cover, Leena has no choice but to bump off a body or two, but what she didn't expect is a little assistance from an unexpected player and an interesting position that may or may not go in her favor...
Comparing this to the original's semi-serious tone, Orphan: First Kill leans towards a cheesier fanfare instead of re-hashing the first film's sober song and dance, serving up a level of outrageous camp and an outlandishly ludicrous twist to boot through a direction that wisely tampered with our expectations. It's an approach that works well enough to keep everyone on their toes and, for some parts, it even allows the narrative to explore dimensions within its titular villain that weren't touched touched upon or were just hinted back at Orphan (2009). The choice to have Fuhrman reprise her role as Esther, for one, does induce genuine chuckles as the cheesiness of the character's trait being an adult posing as a child is more obvious now considering the actress is currently in her 20s, but seeing there's hardly a secret regarding the character's true age, not only do we get to see her more openly evil light as a manic mini psychopath (just watch her take a big swig at some wine and play a piano while her hands are bloodied from a fresh kill!) but this also led to the film allowing her to dish out bloodier murders that embraced the franchise's bodycount-friendly premise. 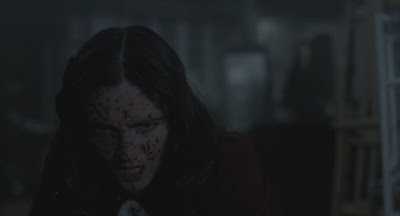 The only drawback, sadly, is that the overall production took a dip down in quality. The entire thing looks and feels like a TV movie, with a strange white tinting that kinda comes distracting for me and a lot of uninspired camera work. The acting from the remaining casts feels rather subpar, though Julia Stiles as Tricia Albright did manage to strike an entertaining stride midpoint into the film once it's made clear that Esther isn't the only dangerous person in the household. And speaking of, there were a lot of opportunities for the film to go a little more crazy with the neat twist it pulled, chances wherein we could have seen Esther really tough it out seeing she's going toe-to-toe against some nasty people, but with it being done halfway into the movie, it all just felt compressed and maybe even a little rushed. Nothing that bad, though. To be frank, it's all still serviceable, but I can't help but think that if the twist came in a little sooner, we could have gotten more drama and intrigue from two sociopaths butting heads!
Looking past its lack of workable scares and polish, Orphan: First Kill at least offers a worthwhile fun with its silly yet committed premise. It may not hit its mark right all the time, but if you're in a mood for some popcorn-lite B-grade horror thriller made to be entertainingly corny, then this one's an okay candidate.
Bodycount:
1 male had his head repeatedly bashed against a wall
1 male beaten to death with a billy club
1 female beaten to death with a tire iron
1 male repeatedly knifed, shot to death
1 male shot with a crossbow, stabbed to death with a lapier
1 female falls to her death
1 male pushed, falls to his death
Total: 7
Posted by Kaijinu at 3:24 AM