From the titular Devil Doll of 1964 to Slappy of R.L. Stine's Goosebumps franchise, ventriloquist dummies have been a minor staple of horror media, tapping into the pediophobic creepiness of the dolls' uncanny valley looks. Entrust this trope to capable hands and we'll get horror cult classics like Magic (1978) and Dead Silence (2007) treating us to a chilling good time. On the other side of the coin, the more clumsy low budget side, we'll unfortunately get messes such as these instead... 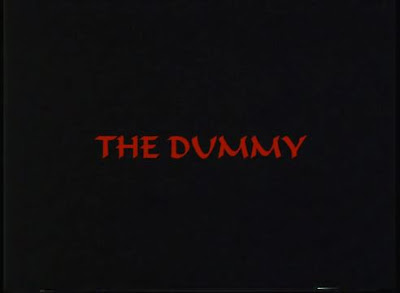 The Dummy (1995)
Rating: *
Starring: Lisa Cook, Todd Jason Cook and Sabrina Cook
Directed and starring Todd Jason Cook, who I'm sure a few of you reading this would know as the same guy who brought us underground cult films like Evil Night (1992), Death Metal Zombies (1995) and Zombiefied (2012), this shlock starts with a newlywed couple visiting a gypsy psychic for laughs and insulting her readings. This obviously enrages the woman, so she casts a death curse upon them and calls forth a demonic ventriloquist dummy to end the couple as well as basically anyone they come across. The rest of the story is practically a rinse-repeat cycle of the couple visiting, getting visited or receiving a phone call from friends and relatives, only for those folks to get attacked and slaughtered by the killer dummy while heavy metal plays in the background, up until only the newlyweds are left for the dummy to terrorize.

As one can expect from a shot on video Z-grade flick, The Dummy (1995) has the production quality of an aged moldy peanut with grainy and dull camera work, an uninspired repetitive direction and appalling audio quality. The characters are outrageously hammy and their dialogues are equally dim, unsurprisingly, and the killer dummy itself is practically just a dummy getting wiggled around while kitchenware is taped or glued on their hands. I will say at least that the hokey gore effects have a little sense of cheesy charm to them, coming fact that there's some effort made to make them as gruesome as possible, but there's only so much random people talking and doing crap on low budget standard that I could take before a boring movie absolutely shoots down any interest I have with it. 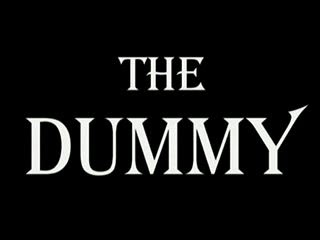 The Dummy (2000)
Rating: *1/2
Starring: Keith Singleton, Irina Björklund and Jocelyne Lopez
Saw this one when I was just around a single-digit age and I can clearly say that, after seeing it recently, nostalgia isn't what it used to be with this title. 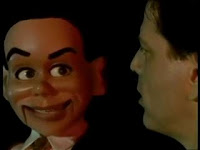 This little obscurity centers around a ventriloquist named Paul (Keith Singleton, who also happens to be its director, producer and writer!) coming back to his home town and making a career out of his talent at a comedy club after a lengthy 20 year stay at a mental hospital. Things were going as fine as a jittery puppet master could try make it to be, even bringing home a couple of women from the club to sleep with, but it all starts to unravel for the worse when Tommy, his ventriloquist dummy, seemingly comes to life and murders one of his coworkers at the club. The following morning comes and a local snarky entertainment critic bites the big one next with a poisoned blow dart after bashing Paul's performance.
Hearing about these recent deaths, Paul starts to freak out and reaches out to a few people he could trust for help, including a new lady friend who wanted to write a book about people with special conditions and a psychiatrist who treated him back at the ward. It seems this isn't the first time the man had some problems dealing with dead people and he believes all of this has something to do with a few blackouts he have been getting lately, as well as his own foul-mouthed homicidal ventriloquist dummy... 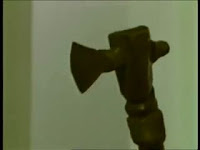 I'll give The Dummy (2000) this; it tries to mold itself as this low budget Hitchcockian stride of hero-antagonists struggling with their dark pasts, a "Jekyll and Hyde" premise coupled with some efforts to deliver genuine suspense and thrills as seen in some scenes such as Paul trying to dispose the body of one of Tommy's victims, and too the few kills that focus more on build-up rather than blood and gore. The whole strive has its potential to be effective but it mostly fails due to the fact that plentiful of the talents involved couldn't act to sell what the movie's offering and the plot itself is just as basic as they could come, very much predictable from the start to finish even with all the red herrings thrown in to try sway us away from figuring things out too soon. You could say it overstayed its implications to what's going on in our lead's head to the point that its little reveal in the end comes to no surprise, in turn leading to a letdown of a finale regardless of whether you see this film as a straight-to-video psychological thriller or a killer doll slasher flick. 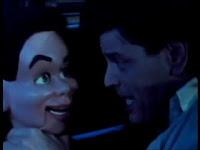 It's cinematography is shaky at its worse, lowered down further in quality thanks to this movie's inept editing and uninspired lighting. The only thing The Dummy (2000) would probably be best remembered for is its long gratuitous sex scene between Singleton and Irina Bjorklund, a Finnish Jussi Award winner in her first American movie role, basically handing this film its obligatory B-grade sleaze. Other than that, this film is a rather overly familiar walk down the psychodrama path paired with slasher film bodycounting and risqué business and, honestly, there isn't much you're missing here. In fact, it can get darn tiring if you don't have the patience for ludicrous bargain bin Hitchcockian thrills but should you find yourself curious about this little mess, a word of warning: Avoid the UK DVD release! They zoomed in the whole thing so much that it cropped heads and credits! The US VHS release does fair a tad better, but it is getting shorter in supply...
Bodycount:
1 female knifed in the gut
1 male knifed in the neck
1 female knifed to death
1 male shot on the neck with a poison blow dart
1 female hacked to death with an axe
1 male ran through with a spear
Total: 6
Posted by Kaijinu at 4:11 PM