Down The Familiar Road: Nobody Gets Out Alive (2012) 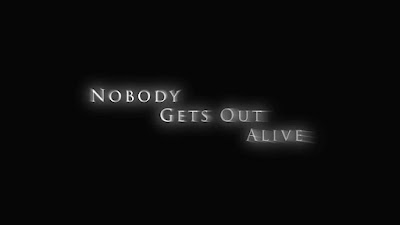 Nobody Gets Out Alive (2012) (AKA "Punishment", "Down The Road", "Slasher In The Woods")
Rating: **
Starring: Jen Dance, David J. Bonner and Shaun Paul Costello
Among the types of slasher flicks out there, the backwoods ones are the easiest to follow and replicate as the bare bone point of its plotting is simple: have a group go to the woods for one reason to the next, show them having a good time and/or some drama, throw in a couple of killings of random extras to keep the momentum going until you get to the climax wherein the stabby fella goes to kill the group one by one. Throughout the years, we got titles that did a little more effort into bringing flair and creativity into their personal variant of forest-set bodycounting (I'm looking at you, The Cabin in The Woods (2011), The Final Girls (2015) and You Might Be The Killer (2018)~!), but there are, of course, those that opted to ride along the simplistic route of clichés and tropes. Most of them are cheap but passable enough, particularly those that cheesed its writing and/or added a little more chunk and blood in its kills, but there are a few that add very little to the backdrop that it's vanilla compared to its splashier kin.
Nobody Gets Out Alive (2012) is an example of these paint-by-numbers backwoods-type, opening with a group of 2000s teens getting hammered in a forest and partying until daybreak. The gang eventually drives back home, still drunk from that night's debauchery and accidentally mows down a young girl playing an early morning game of hop-scotch. 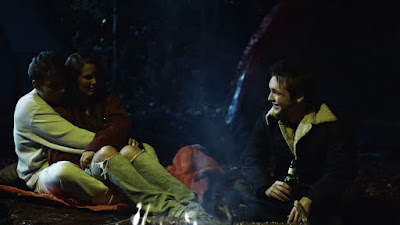 Forward ahead to the present, troubled teen Jen was just sent home from a hospital after being treated for clinical depression when her parents, in a concerningly dumb move, forces her to go out and have fun with her friends as they fear she might become an agoraphobic if she continues to coop up in her room. (Yeah, something tells me these douches was never clinically depressed) Jen begrudgingly agrees to get them off her back and it's more or less down the familiar trail from here: she joins her buddies in their trip down the woods, beers get bought, townie doomsayer says their doom sayings, there's a minor conflict between some locals and, as usual, scary stories are shared in a campfire.
One scary story, as you would also expect by now, involves the opening vehicular manslaughter and what happened afterwards. It's basically the whole Friday the 13th Part 2 (1981) treatment with the girl's father, Hunter Isth, going nuts and retreating to the forest where the teens who killed his daughter got drunk, murdering any troublesome youngsters with similar affairs in mind.
You can take a quick guess where Jen and her little gaggle of friends are hanging out right now.
Apart from the truckload of recycled plotlines and clichés, Nobody Gets Out Alive (2012) has the unfortunate grace of being awkwardly riddled with odd pacing, amateur dialogue and bland deliveries from its talents, leading to an excruciating direction following these characters and their clumsy interactions that more often than not paint them as irritable and uncaring, if not bland. Unsurprisingly, these result to a lack of point building around these casts, making their camping misadventures a chore to sit through and the fact that this movie's camera work is average and there's a lack of inspired scoring practically dulled the experience even further. 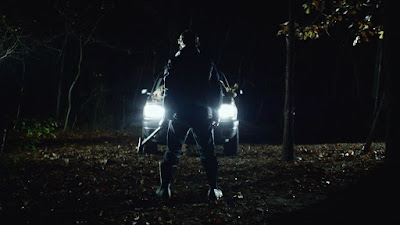 Still, I find Nobody Gets Out Alive (2012) worth its while on a degree as at least it has its kills and villain going for it; though the murders are nothing too out of the ordinary, they do a fine enough job of looking graphic with the make-up and special effects without overly relying on heavy gore and bloodletting, giving a genuine old school feel to these slayings which works very well with the movie's moderate-looking budget. The same can be said to the hammer-wielding villain Hunter Isth, looking awfully generic as a slasher and bearing a murder motive that's have been done to death, but I still find him workable for how grounded and 3tragic he is, particularly during a scene where he monologues the trials and tribulations he went through as a widowed husband and father, making him somewhat relatable and putting him in a more sympathetic light. These little elements are what made the film a bit more tolerable, a welcome blessing seeing how considerably testy it can get.
Honestly, that's all I can say about Nobody Gets Out Alive (2012). It's a backwoods slasher flick and that's pretty much all what it is, routined down to the very last scene, nothing standing out from it, so not too hard at all to picture why this one is so obscure. If you want to see it, by all means go. You could do worse, but you can do a lot better, too...
Bodycount:
1 girl hit by a car
1 male brained to death with a sledgehammer
1 elderly female had her throat cut with a hunting knife
1 male stabbed in the gut with a machete, meat hook through his throat
1 female had her neck broken
1 male brained in the temple with a sledgehammer
1 male had nails hammered into his head
1 female beaten to death with a brick
1 male brained with hammers
1 male brained with a hammer
Total: 10
Posted by Kaijinu at 2:36 AM