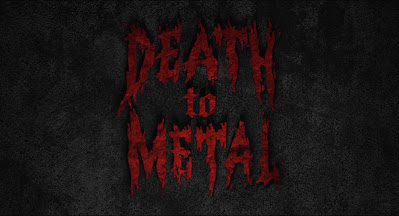 Death To Metal (2019)
Rating: **1/2
Starring: Alex Stein, Grace Melon and Andrew Jessop
I guess you could say that despite not being a complete fan of the music genre, I'm at least tolerant towards heavy metal, even having my share of fave metal bands both real and fictional. (Hello, Lordi. Hello, JP Ahonen's Belzebubs.) As for Rocksploitation slashers, though, I'm a tad more finnicky; aside from a selective few faves of mine like Rocktober Blood (1984) and Hard Rock Nightmare (1988), a good lot of these Heavy Metal massacres like Terror on Tour (1980), The Choke (2006) and Deadtime (2012) just doesn't cut right for me, may it be due to the lack of likable characters, interesting kills and/or overall quality of the direction and story.

Death To Metal is another contender for the Rock and Roll hack'n slash gig, more or less promising your typical round of head bangers getting sliced and dicked with a kinda intriguing twist that it doubles as a religious horror flick. Heavy metal clashing against Bible-thumping, what can go wrong?
The film opens with throat growling vocals playing while a trio of metal heads corner and harass a young Catholic boy named Milton by forcing him to watch his precious Bible get pissed on. Forward ahead to the present and we see Milton have grown up into a hateful priest with a short temper and a Fire-and-Brimstone outlook towards his religion, a fact that rightfully concerns his church's head priest into suspending Milton from churchly duties until he seeks professional psychological help.

Feeling betrayed, Milton goes on an alcoholic bender wherein he proceeds to break into the head priest's office to trash it, murder an unfortunate janitor who catches him and tops it all off with a high speed car crash that ends with him lying heavily wounded in a creek. Unbeknownst to our vitriol-spewing Bible-thumper, the creek also happens to be the dumping site of some highly toxic animal feed that, according to the litterbugs, made "hulked-out hogs".
Now deformed, mutated with super strength and gone completely nuts, a more monstrous Milton murders his way to a big metal show where a down-in-his-luck former band lead Zane and his normie bestie Mariah will witness the priest's savage cleansing of all things he deems unworthy of God's love and glory, one sliced up body at a time.

Going about the messy slasher bits of Death to Metal (2019), I would say it's serviceable enough; the story is easy to follow and the idea of the villain being this very angry priest undergoing an extreme mutation to become even more of a monster fully embraces the silliness of the plot and I love the movie for it. Andrew Jessop is just awesome as Milton Kilborn, with a scowl meaning business and line deliveries that genuinely reflect his character's mental and emotional state as a holy man who gave up on forgiving sinners and fully dedicated his life to the Old Testament style of brutality as divine intervention. Heck, one scene have him reacting to a story about a man brutally murdering his cheating wife by simply pointing out that adultery is a grave offense in the Bible, overlooking the fact that multiple murders were committed. Chilling, indeed.
On the other side of the maniac coin, Monster Milton, played by Trent Johnson, took on a fairly simplistic look of a lumpy, cancer-filled monstrosity hidden underneath a hooded cloak, wielding a wooden cross as his main weapon. Can't say I'm a big fan of the design, especially when I cannot even get a good look at most of the make-up effects done for this aberration, but so long as the gross mutant juggernaut is still spewing judgmental holiness and dishing out a gnarly kill or two, I can dig it on a level.