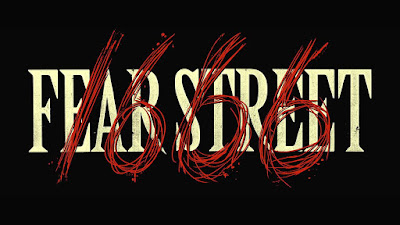 Fear Street Part Three: 1666 (2021)
Rating: ****
Starring: Kiana Madeira, Ashley Zukerman and Gillian Jacobs
Previously on Fear Street; After learning through a fellow Shadyside massacre survivor's own harrowing account back in 1978 that they can end the curse afflicting their town by reuniting a dead witch's severed hand with the rest of her remains, siblings Deena and Josh find the witch's hand and head forth to her suspiciously misplaced grave. But when Deena bleeds unto the remains, however, she begins to see things in the past through the witch's eyes...

It's the early 17th century, at a settlement called Union; Sarah Fier is just like any other youth around the community, spending her days helping around with her family's chores and enjoying whatever free time she has left with her friends. But when one night of festivities under the full moon had her confessing her love for her friend Sarah Miller and got intimate, it somehow kicked off a curse that spoiled the town's harvests, poisoned the water and possessed the settlement's pastor Cyrus Miller into murdering a dozen children. As the town's grievance boils into blaming rage, they set their eyes on hunting down Sarah Fier and Hannah Miller as many claim to have seen the two practicing witchcraft.

Now on the run and blamed for the mysterious plague, Sarah Fier looks for a way to save not only herself, but her beloved Hannah, this including striking a deal with the Devil himself. But not everything is what it appears and Sarah, along with our present day Shadysiders, will find out the horrible truth about the darkness befalling them...
Much like the first two Fear Street movies, 1666 subverts expectations by practically handling a story that is its own rather than a homage to a popular slasher plot; running around nearly two hours, the film is split into (further) two parts, with the first being a folk horror story taking place during the fire-and-brimstone era of colonial America. This is where the trilogy bring forth its most intriguing and strongest plot point as it plays with the idea of forbidden romance, paranoia and religious fanaticism through a twisty mystery as a mean to flesh out a workable overarching story even more. The unexpected turns within these parts work fittingly well with the overall tone of the story as a whole, keeping us on our toes as we watch Fier and Miller (both played by the two main casts from the previous two films, a nice touch that gave their characters a bit of legacy) figure out what's causing the misfortunes, all the while surviving an extremist mob on a murderous witch hunt. Through its gloomy camera work and suppressive score, this half is simply evocative and intense down to the expected yet still shocking and surprisingly bittersweet end that leads us back to the present.

Without giving away the big reveal, the second half of 1666 follows up on where the events of 1994 left off so far, now with a stronger sense of urgency and tighter atmosphere as a surprise villain is made aware that their secretive exploits have been compromised and is now willing to do anything to make sure it stays hidden. The whole second act just ties neatly to everything that been happening, made better with the fact that it brought back the spunky energy of the first movie which was noticeably absent from the second. This means more creative Scooby-Doo friendly plans to stop yet another small army of stabby, masked and not-so-masked villains (I swear, these killers better get their own movies!), ending with a satisfying finale that tug heartstrings and a last shot implying some possible mayhem in the future. It perfectly balances out the bleak and gloomy first half, a cleverly entertaining way to wraparound the entirety of the story.

With the story straying away from the typical hack-and-stab film plot, this leaves Fear Street 1666 a bit of an oddball within the interconnected slasher trilogy with its lack of sizeable onscreen kill count or recognizable teen horror tropes. It does earn points here, however, as a general horror flick with its bold moves of having the first set of slayings involve children (done offscreen and it's only for a single scene, but the shown aftermath of the carnage is still unnerving) and Sarah Fier's own hanging being effectively distressing considering the twist. It further makes up for its lack of solid slasher build with a very engaging story and character development and this  is something I personally see as not only this movie's winning factor, but the entire trilogy's; there's respect for the slasher tropes we all know and love here, addressing it before giving it a spin of its own. This fresh take on the subgenre is exactly the kind of welcome creative response we need and is why each film works.
A strong last chapter to a trilogy of slasher throwbacks and then some, Fear Street 1666 is as good as it can get when it comes to a fun mystery, intense thrills and ghoulish cavalcades of masked killers and traitorous spellcasters. It certainly has its little flaws (I find it kinda hard to buy that puritan teens sneaks out for parties, drinking the fruits of the land and take berries as drugs but, eh!), but for all the good it has to offer, I can honestly say this is a one gratifying entry for a of a kind slasher event!
Bodycount:
12 children found murdered, eyes plucked out with a horseshoe hook pick
1 male stabbed in the side with a pitchfork
1 female had her throat cut with a knife
1 female hanged
1 male stabbed through the neck with a knife
1 male knifed in the gut
1 male knifed in the eye
Total: 18
Posted by Kaijinu at 10:33 PM