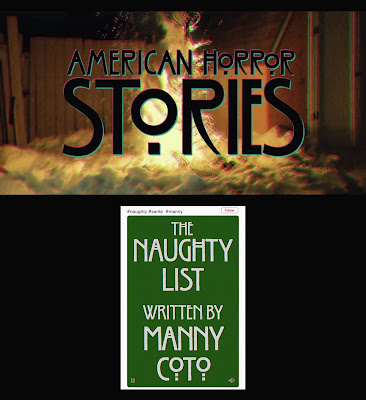 Taking a bloody stab at internet fame, a group of three dude bro influencers and their more timid tech guy-slash-camera man, collectively known as the 'Bro House", decided one December day to try something a little different from their usual posts of internet challenges, pranks and other tomfooleries; camping out near a bridge infamous for suicide jumpers, the gang records a man's demise and posts it online with little hesitation, hoping for millions of new subscribers. The result though, as many would've guessed, is a ton backlash from their soon-to-be former fans and sponsors, leading to the Bro House boys to try everything they can to salvage their channel and get their increasingly declining follower count to spike back up.
One of these sad attempts happen to be raiding a mall Santa's workshop where they harass staff and visiting families, unsuspectingly leading to a nasty surprise for them later: as it turns out, the Santa working there (played by the ever intimidating and badass Danny Trejo) is actually a serial killer who snuffs out real mall Santas to take their place and you can take a good wild guess who just ended up in this murderous Sick Nick's naughty list...

How well you would take in this mini-movie episode depends on how much toxic behavior and dumbassery your stomach can handle before the carnage because it is going to take a while to get there; for a good sum of the story, we're treated to three douchebags flexing their perceived invincibility as social media influencers and their belief that they're above any form of decency and morality just because they have a website and a fanbase. Admittedly, this is both frustrating and satisfying to watch as these characters' monumental stupidity to even understand the gravity of their actions meant seeing them struggle to grasp and accept the situation they caused on their own, henceforth further digging their own graves deeper not just as internet stars, but also literally when they finally cross the wrong person. I love the fact they're suffering from their choices, but I cannot help but think this could have been written and implemented better, perhaps with a more compelling set of characters to really give that gut a good ole' punch rather than going for the easy route of Paul Logan caricatures with even less functioning braincells.

In a way, this does make the resulting massacre all that more satisfying given how much these character made themselves so deserving of being targeted by a holiday-themed slasher. I love the fact Danny Trejo's slaughtering Santa has little to go by in terms of solid origin and depth, as it kinda gives him this mysterious air of simply existing there to do harm in what he sees as his deed as Saint Nick. The kills are bloody at best, the most creative among them being a nasty way out involving Christmas lights and a pool, but with it happening around the last third of an episode with a near 40 minute run time, I did wish it was a tad more longer so we could further engross ourselves to the unfolding horror.
In a nutshell, American Horror Stories' The Naughty List (2021) embodies the worst and best elements of a simple slasher story, focusing first on a slowburn rabbit hole of internet toxicity and cancel culture before getting on the gory goods of candy cane colored crossbows and human gullet-decorated Christmas trees. It's not the grandest example of a holiday slasher story done right (heck, it barely even felt like its Christmas throughout the episode), but if you can survive your way through annoying characters without a hitch just to see that sweet, sweet mayhem for all that trouble, I say go for it and catch this!
Bodycount:
1 male jumps off a bridge
1 male found inside a box dismembered into pieces
1 male had his head twisted
1 male tangled in Christmas lights and thrown into a pool, electrocuted
1 male shot to death with a crossbow
1 male shot on the leg with a crossbow and set on fire with gasoline, later succumbs to his injuries in a pool
Total: 6
Posted by Kaijinu at 4:36 PM