Another (Japan, 2012 Animated Series)
Rating: ****
Starring: Natsumi Takamori, Naoko Sakakibara, Atsushi Abe
When it comes to anime and manga, I mostly keep myself grounded within the casual and lighthearted side of the geeky interest, meaning I tend to veer towards light-hearted comedies and/or slice-of-life titles a lot more than story-heavy, multi-season franchises. This is out from the fact that I'm not patient enough to sit through five hundred episodes of a single series, nor do I have the capacity to care about a plot that's as thick as ten Bibles when materialized in print. I simply prefer to take it easy when it comes to my Japanese comics and animation, which is why slice-of-life comedies and gag shorts cater best to my taste.
As a slasher fan, however, I wouldn't pass the opportunity to read a manga or see an anime that borrows heavily, if not entire structured around my favorite horror subgenre just to try it out. This leads me to watching one of the more intriguing horror anime titles I've seen in a long while; a supernatural murder mystery that's one part high school drama and one part Final Destination sequel, simply called Another (2012). 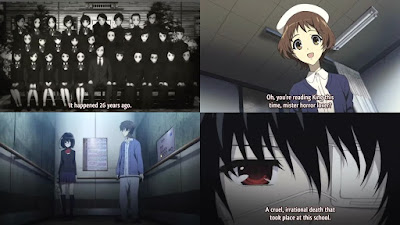 In its single season run of 12 episodes, the series tells the story of one 15-year-old Koichi Sakakibara, the new transfer student of a rural junior-high school who finds himself assigned to a particular classroom that's rumored to be cursed. As soon as he settles in, he's drawn to Mei Misaki, a weird and quiet eyepatch-wearing girl in his class whom both teachers and students seem to ignore as some sort unspoken rule that Koichi, understandably, finds odd. Curiosity eventually takes over the boy and he begins to look into the mystery surrounding the school, which in turn triggers a methodic series of fatal accidents and violent deaths befalling unto not only everyone in the afflicted class, but also their loved ones.
Visually, Another (2012) is a commendable work of animated horror drama that undoubtedly has its gloomy and suffocating feel made with an art direction that greatly focuses on dim lighting, twisty angles and a minimalist approach. The atmosphere these visuals create, in turn, goes heavily well with the show's plot considering how much it prompts an isolated feel drawn from not only the story's rustic small town premise, but also from the matter that there are hardly any other characters outside the class circle. This approach meant that the show's very mystery-centered, doing its best to hint and weave all the necessary red herrings and clues to what is happening to Koichi and Mei's peers and friends, working the concept of the curse first before slowly branching it out to shocking onscreen deaths that interestingly increases in number the further the series goes, and too putting cliffhangers to good use in each episode's end.

It is, however, hard to ignore the series' slow start courtesy of some mishandled opening exposition which made the first two episodes not only feel sluggishly paced, but redundant by the fact that we have to sit through our protagonist discover things we may already know from the start. It does this dance until the near end of the third episode, wherein we get out first kill and it was a spectacular one at that.
On that note, I fully appreciate the balanced amount of gore, brutality, shock and suspense done for the deaths here in Another (2012); while the bloodletting is generous and carnally striking, I like the fact that the story tackles the subject of grief and loss during the series' slower moments. It gave the characters a lot more depth and it helps make the murders feel more cathartic and tragic even in their manic and occasionally exaggeratedly twisted moments. At most, the deaths featured fits wonderfully within the Final Destination franchise as we get a set of both subtle and not-so-subtle accidents taking out the cursed students one-by one. Highlights among these are the first death involving the wrong end of an umbrella and a terrifyingly claustrophobic end through a malfunctioning elevator. 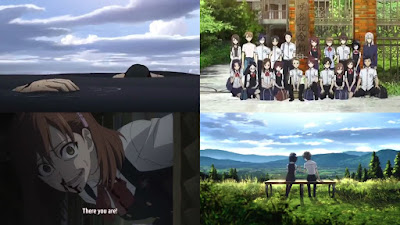 Around the last two episodes of the show, the chaotic tension finally breaks and the students go on a frenzied survival mode as they try to murder one another in hopes of ending the curse. It's around here that the show delves into superstition and paranoia, molding it around the supernatural and resulting to bountiful onscreen murders and free-for-all accidents that ends on a somewhat decent twist that's as heartbreaking as it is purgative after all that madness.
With modest character designs and talented voice actors bringing a sense of groundedness and intrigued flair to their roles, Another (2012) is simply one of the better horror anime entries a curious cat can try and rightfully enjoy. While one may have to work through a number of who’s who of characters involved in the plot (even more once we get around the second half!), it doesn't completely overcomplicate itself much and the mystery is fascinating enough in its twists and turns, dishing even bloody ends at the side to satisfy one's exploitative need for bloodshed. Animated supernatural murder mystery fun with a bodycount, what else could you ask for?
Bodycount:
1 female lands neck first unto an umbrella's tip (Episode 3)
1 female implied killed in car crash (Episode 4)
1 female mangled in a dropping elevator (Episode 4)
1 male suffers a heart seizure (Episode 5)
1 male suicide, repeatedly gouged his own neck with a knife (Episode 7)
1 female seen murdered, method unknown (Episode 7)
1 male dismembered through boat propeller (Episode 8)
1 male struck by lightning (flashback) (Episode 9)
1 female slipped off a cliff, mangled in fall (flashback) (Episode 9)
2 females and 1 male drove off a cliff after a rock hits their car (Episode 9)
1 male found crushed by a crashed excavator (Episode 9)
1 male impaled through the mouth with a branch (flashback) (Episode 10)
1 male found pinned to a wall with spikes (Episode 11)
1 female slips and snapped her neck (Episode 11)
1 male incinerated by flames (Episode 11)
1 female caught on wires, hanged (Episode 11)
1 female gets a thrown knife to the back (Episode 12)
1 female knifed on the back (Episode 12)
1 male crushed by a falling pillar (Episode 12)
1 female gets a thrown knife to the neck (Episode 12)
1 male brained with a steel rod (Episode 12)
1 female impaled by flying window shards (Episode 12)
1 female killed with a knife (flashback, Death A) (Episode 12)
1 female hacked with a pickaxe (Death B) (Episode 12)
Total: 26
Posted by Kaijinu at 9:13 AM